Meanwhile, plans are afoot to extend it beyond France 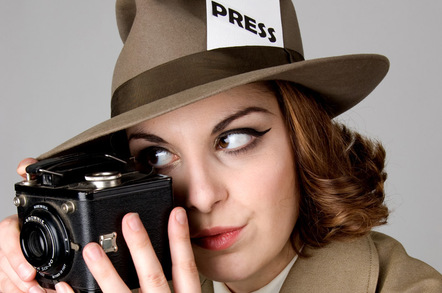 A collection of French journos have teamed up to take a new surveillance law to the European Court of Human Rights (ECHR), claiming it infringes "the rights and freedoms of journalists".

France’s so-called Patriot Act came into force on Saturday, but the French legal press association, APJ, said it would attempt to have the law overturned.

“This law infringes the rights and freedoms of journalists, and their sources," the said body. "Government surveillance, through wiretaps or mass data collection, will consequently affect the right to information of our democratic society."

"Journalists may be victims of these violations without even being informed since the monitoring and recordings are secret,” the APJ added.

The Projet de Loi Relatif au Renseignement gives sweeping powers to intelligence agencies and was passed by both chambers of the French Parliament during the summer, before being given the green light by the national Constitutional Court.

Le Charteur des Snoopeurs would allow spies to use International Mobile Subscriber Identity catchers to hoover up telephone data and to access emails and online communications of anyone suspected of being linked to terrorism, seemingly with little or no judicial oversight.

The law creates new snooping superpowers not only for terrorism and organised crime cases, but also to protect "major interests in foreign policy" and "economic, industrial or scientific interests". The journalists say that this, in particular, would discourage whistleblowers from talking to reporters.

Lawyer Patrice Spinosi, who filed the case with the ECHR, told Le Monde that this is about more than just the press: “Anybody can be snooped on!"

The group of 180 journalists has some powerful backers. Both the Human Rights Commission (Commission nationale consultative des droits de l'homme, CNCDH) and the French data protection authority (National Commission on Informatics and Liberties CNIL) have criticised the law.

Although it approved the majority of the law, the French Constitutional Court did place one caveat on it; no surveillance of communications outside French borders. But already two MPs, Patricia Adam and Philippe Nauch, have managed to get a NEW draft law (the Proposition de loi relative aux mesures de surveillance des communications électroniques internationales) through the lower house, reintroducing some of the elements kicked out by the court.

“France needs to remember its human rights obligations. This is the second time in a single year that the country has introduced disproportionate surveillance measures. There is a stark contradiction between the French government’s outrage over being subject to surveillance, and passing legislation that grants the DGSE the same kind of indiscriminate spying powers as the NSA,” she added. ®

Analysis Letting Section 215 provisions lapse may be the worst solution