Terror in the Chernobyl dead zone: Life - of a wild kind - burgeons

These nuclear wolves will devour us all! 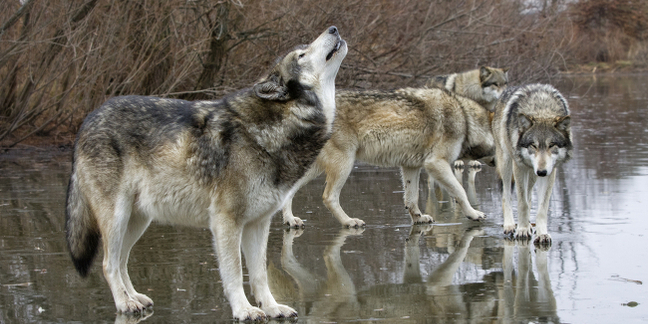 The Chernobyl "Dead Zone": a terrible wasteland swept clean of life by a foolish humanity's meddling in things best left alone. Or is it?

Not so much, it turns out. Not only were the consequences of Chernobyl relatively minor for human health* - they've actually been very positive for wildlife in the area around the abandoned nuclear plant.

According to a new scientific study just published:

Several previous studies of the Chernobyl exclusion zone indicated major radiation effects and pronounced reductions in wildlife populations at dose rates well below those thought to cause significant impacts. In contrast, our long-term empirical data showed no evidence of a negative influence of radiation on mammal abundance. Relative abundances of elk, roe deer, red deer and wild boar within the Chernobyl exclusion zone are similar to those in four (uncontaminated) nature reserves in the region and wolf abundance is more than 7 times higher. Additionally survey data show rising trends in elk, roe deer and wild boar abundances from one to ten years post-accident. These results demonstrate for the first time that, regardless of potential radiation effects on individual animals, the Chernobyl exclusion zone supports an abundant mammal community after nearly three decades of chronic radiation exposures.

One of the most infamous of the previous doom-mongering studies was conducted by Alexei Yablokov, the one-time chairman of Greenpeace USSR. In 2006, with the aid of Greenpeace International, Dr Yablokov assembled a large amount of material into a publication called "Chernobyl: Consequences of the Catastrophe for People and the Environment". Among other things this volume said:

The radioactive shock when the Chernobyl reactor exploded in 1986 combined with chronic low-dose contamination has resulted in morphologic, physiologic, and genetic disorders in every animal species that has been studied — mammals, birds, amphibians, fish, and invertebrates. These populations exhibit a wide variety of morphological deformities not found in other populations. Despite reports of a "healthy" environment in proximity to Chernobyl for rare species of birds and mammals, the presence of such wildlife is likely the result of immigration ...

The Chernobyl catastrophe has impacted on fauna and will continue to have an impact for many decades to come ...

... levels of incorporated radionuclides in some areas of Europe remain dangerous for mammals ...

The publication goes on to specifically claim that caesium contamination near Chernobyl has adversely affected wolves in the area, which is evidently not the case.

Dr Yablokov's paper was not peer reviewed and has not been taken seriously outside hippie circles (all Greenpeace staff members are required to acknowledge their status as hippies, like it or not). The fact of the Chernobyl wildlife resurgence is now confirmed by the learned journal Current Biology, so the Greenpeace view of events can be consigned to the bin.

“We know that radiation can be harmful in very high doses, but research on Chernobyl has shown that it isn’t as harmful as many people think," says Professor Jim Smith of Portsmouth uni, senior boffin on the new Chernobyl study.

“There have been many reports of abundant wildlife at Chernobyl but this is the first large-scale study to prove how resilient [local animals] are.

“It’s very likely that wildlife numbers at Chernobyl are much higher than they were before the accident."

So there you have it: the horrific consequences of a nuclear "disaster" are that you get a thriving national wildlife park. ®

*The universally accepted death toll from Chernobyl as at 2005 stood at 56: 47 workers at the accident site and nine children killed by thyroid cancer as a result of drinking contaminated milk. These will be the only deaths that can be directly shown to have resulted from Chernobyl, but one can also construct a figure saying that as many as 4,000 deaths may eventually happen as a result of it, and this is the UN assessment.

That sounds like a lot, but when you reflect that on the same basis air pollution - in large part resulting from efforts to cut carbon emissions - is responsible for tens of thousands of deaths every single year just in the UK, it becomes clear just how unimportant Chernobyl was for human health - let alone the non-events at Fukushima and Three Mile Island.

Nuclear power: safe for humans, great for the natural environment.

Greenpeace reveals WORLD'S FILTHIEST CLOUDS – and the cleanest may shock you

Operation get behind the hippies

Roundup Plus: A peek inside Nvidia's Ampere architecture, and more