What planet are you guys on? 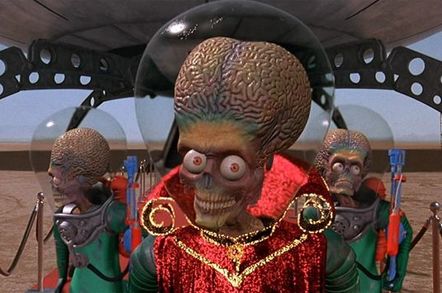 The announcement by NASA on Monday that Mars has flowing liquids on its surface was welcomed as tremendously exciting scientific news by intelligent and rational people.

For others, it is obvious proof that the space agency is misleading the American people.

Leading the pack of doubters is waning US shock jock Rush Limbaugh, who was quick to denounce NASA's announcement as both unimportant and probably a conspiracy to bolster the case for climate change. He said that NASA has lied about environmental data in the past, so why should it be believed about water on Mars – if that's even its real name.

"They're lying and making up false charts and so forth, so what's to stop them from making up something that happened on Mars that will help advance their left-wing agenda on this planet?" the calm and measured one said.

"OK, flowing water on Mars, if we're even to believe that, what are they gonna tell us that means? That's what I'm gonna wait for. Because I guarantee, let's just wait and see. Don't know how long it's gonna take, but this news that there is flowing water on Mars is somehow gonna find its way into a technique to advance the leftist agenda."

Limbaugh takes issue with NASA's findings that a few billion years ago Mars was a wet planet similar to Earth, but that it lost most of its atmosphere for reasons not yet discovered. This "climate change" is deeply suspicious, he said, and the timing of the announcement is also suspicious, as he said in a later show.

"NASA wants to go to Mars. And Obama has turned NASA over to Muslim outreach, in case you've forgotten," he said.

"NASA wants the money to go to Mars. It makes total sense in the world that they would time, NASA, the release of, 'Look what we found! We found flowing water on Mars! Oh my God, there could be life! Oh my God, we gotta go we gotta go!' And here comes the movie. They throw in climate change relationships just for a little dot the I, cross the T, and magic happens."

The forthcoming release of The Martian later this week is certainly interesting timing. The film, which explores if it's possible for an astronaut to survive on the Red Planet using science and his wits, caught a lot of free publicity thanks to the announcement – something the maker's acknowledged on Twitter.

The film's director Ridley Scott did say in an interview that he'd been shown photographs of water on Mars a few months ago, but that it was too late to build that into the film, since it had already been shot. He also said if the astronaut had found water on Mars it would have ruined a couple of very visual scenes.

Out on the nuttier end of the spectrum, YouTube creators have any number of conspiracy theories on the topic. Some posit that the announcement of water, and the forthcoming film, are part of a larger plot to soften humanity up for a false flag alien invasion, which will be used to unite the people of Earth under a brutal dictatorship.

Then again, as the author of that particular piece of nuttiness points out, "Every news story has an agenda – do not trust these liars." ®