Third car in the range aimed at large American families 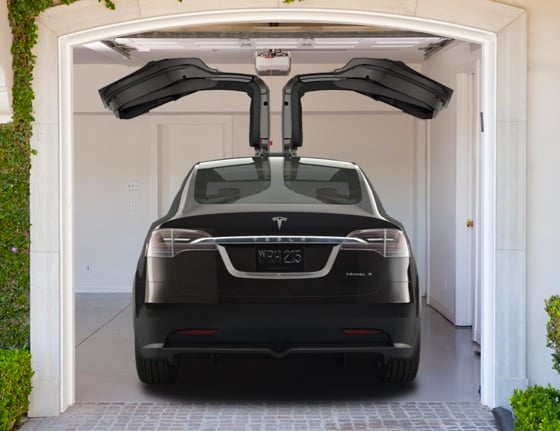 The Model X concept cars had cameras instead of door mirrors. This is a very sensible move in terms of fuel economy but unfortunately illegal as the world's car-industry regulation hasn’t caught up with technology. The moody picture announcing the launch shows nothing clearly, save that the car does indeed have door mirrors.

The extra size means that not only will the car take seven full-sized adults – the model S takes five with an additional two rear-facing child seats in the boot – the new car also has a much bigger front boot, reported to be big enough for two sets of golf clubs.

The Falcon doors – unlike those on the Rolls Royce Wraith – have sensors to stop them from banging against roofs, pillars and other cars in car parks. One issue car manufacturers face with all kinds of billionaire doors is that things fall out of the door pockets.

This is a problem Tesla has neatly solved by not having any. Even the Model S with its mere millionaire doors doesn’t have pockets. Hopefully the Model X will have more than the inadequate two cup holders found in the current model.

There is a pecking order in the Tesla customer list. “Founders” are friends of Elon, investors and otherwise favoured customers. Mortals can be elevated to the founders list by proselytizing the Musk religion to such an extent that they have converted a significant number of friends to Telsa ownership.

The last members of the inner circle are those who have bought “Signature” cars. These save you the effort of choosing what options you want by ticking all the options. Signature customers got tickets to the launch event. Founders will drive off in their cars.

You can watch the launch streamed at 8pm PST, or 2am to those in the UK. Isn’t that so much more exciting than staying up to watch the moon turn red? ®

Tesla's battery put in the shade by current and cheaper kit