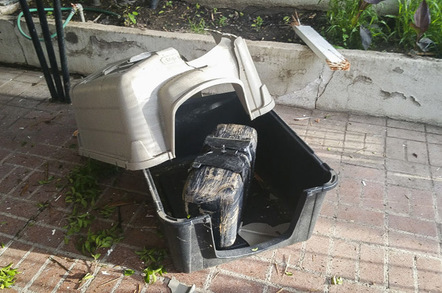 A 26lbs bundle of cannabis appeared from the sky and bombed through the roof of a carport in the Arizona town of Nogales.

Maya Donnelly heard what she thought was thunder during the night, but later that morning found wood strewn across the ground around a bulky bundle wrapped in black plastic.

Therein was the big old chunk of cannabis, which the local plod valued at $10,000 and reckoned was accidentally dropped by a drug smuggler's aircraft.

"It's all right on top of our dog's house," Donnelly said.

Police are trying to determine whether the bundle was transported by an aircraft or drone. Such runs usually occur at night, reports the Associated Press.

The incident happened on 8 September.

The town of Nogales is on the US-Mexican border, and Donnelly said she assumed the bundle was drugs. Her husband Bill encouraged her to ring 911.

Her friends and family have joked that the couple could have just kept the package. "That's what everybody says," according to Donnelly. "Why did you call 911?"

"But how can you have a clear conscience, right? We could have made lots of home repairs with that." ®