ICANN taking over the 'net from Uncle Sam? Ted Cruz to the rescue! 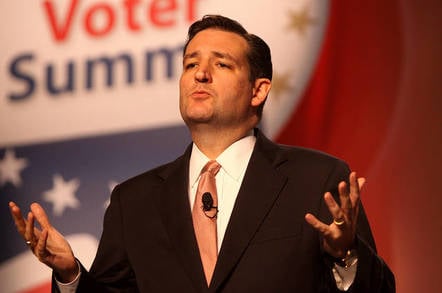 Four leading Congressional figures, including US presidential candidate Ted Cruz, have questioned whether the Obama Administration has the legal right to transfer control of the internet's key technical functions outside the US government.

The politicians note that the file – which acts as the global internet's main address book – is designated a "national IT asset" by the federal government, and argue that its creation was "funded by the American taxpayer and coordinated by the Department of Defense."

Domain-name overlord ICANN and its IANA body are in charge of the root zone file, under contract from the US government's Department of Commerce. That contract is coming to an end, and ICANN wants to run it all on its own while virtually accountable to no one.

And so Grassley, Goodlatte, Issa and Cruz asked the GAO to look at three questions:

What does this all mean?

There are several things going on with this letter.

First, a number of Republicans, but particularly Senator Ted Cruz and his staff, are annoyed at the GAO report that came out last week that basically gave the green light to the IANA transition from the US government to domain overseer ICANN.

That GAO report was kicked off by some aggressive questions posed by Republican Congressmen, and they had hoped it would give them ammunition to disrupt the IANA transition process. They had discounted, however, the fact that the process was developed and agreed to by the US government's civil servants, and that the GAO is not Fox News.

Efforts to disrupt the transition through the use of legislation were also stymied when concerted political efforts led to a Dotcom Act that covered the transition but struck a three-way compromise that gave everyone what they wanted without stalling the transition itself.

What Cruz et al are now trying to do is slow the process down until after the US presidential elections in November 2016 in the hope that a Republican takes over the White House, at which point the whole process could come to a grinding halt.

In order to create that delay, the Congressman has tried to use the GAO's own report against it. Back in 2000, the GAO looked at the question of relinquishing the control over the root zone file. At that time, ICANN was trying to get the IANA contract handed over as part of a change in its overall contract with the US government.

At the time, the relevant US government agency, the NTIA, did not want ICANN to take IANA over and it used the GAO report to argue that it wasn't legally able to do so. In fact, the GAO found that it was "unclear whether such a transition would involve a transfer of government property to a private entity."

The GAO then noted:

That report was enough to get ICANN to back off asking for IANA. But 15 years later, the Cruz letter notes: "We understand that to perform this work, GAO will need to conduct both significant audit work and complex legal analysis."

In other words: take your time, there's no need to rush this. But of course, we couldn't possibly consider moving control until you've decided.

It's the latest gambit by a small but very vocal group within Congress to squash the IANA transition. It's also one that former Clinton advisor Ira Magaziner warned about late last week when he told the group devising the transition plan: "As the political season develops next year, something like this, no matter how meritorious and how well constructed, could irrationally get caught up in the political process here and therefore, defeated or put off. I think you have a limited amount of time to get this done and for the US government to consider it and pass it."

Meanwhile, if Cruz's efforts to delay and derail the process don't succeed, there is always the chance that ICANN itself will manage to shoot itself in the foot.

On the last day of a special two-day meeting called by ICANN to try to reach agreements over how the organization would need to change before being given the responsibility of running the top level of the internet, the organization's chair refused to accept a key recommendation that would limit his board's power and even suggested he would rather stay under US government control than lose absolute control.

That approach did not sit well with the internet community, which is currently trying to figure out how to avoid a head-on confrontation with the board while at the same time ensuring that the necessary improvements are made. ®