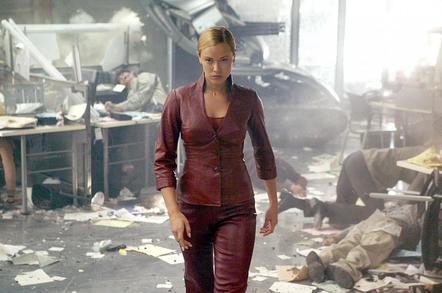 A robotic Romeo, attempting to "charm" or "distract" its target, suffered damage to its antenna during an altercation with a man in North Carolina, according to media reports. The machine was an "elite member" of a specialist local police unit.

The Times-News of Hendersonville, North Carolina, has the story, in which sheriff's deputies were attempting to deal with an armed man they had besieged in his home. On being asked to discuss an alleged previous assault with the cops, the grumpy resident had opened fire, though without hitting anyone.

As is the custom in these situations, a powerful SWAT unit mounted in a heavily armoured vehicle was called in. But, perhaps unusually, the SWAT-cops appeared to favour the making of love - in robotic form - rather than war. According to the Times-News:

A 21-hour-long standoff with an armed man, who fired at officers in Bostic, came to a peaceful end Monday morning with the help of a Henderson County robot affectionately dubbed "Romeo."

Romeo is a remote-controlled robot and is one of the county’s elite mechanized bomb squad members. It is also used by officers to avoid casualties in dangerous situations.

The elite robot member bravely leapt out of the armoured "Bearcat" in which the SWAT team had approached the Bostic dwelling, after gunfire from the house "dented its reinforced shell". The plucky tin cop then closed in on its cap-popping target. We are told:

The charm of Romeo worked ... during the time of the distraction and the suspect’s interaction with the robot, a SWAT team moved in ... Romeo did not escape the incident unscathed. Officers say an antenna on top of the robot was broken ... the conflict, luckily, was resolved without further injuries.

"Damages to equipment" will be sorted out following necessary downtime for the team, according to a local police spokesman. We'd venture to suggest that the smooth tin cop and his colleagues will have enjoyed the traditional celebratory round of doughnuts and battery charging as soon as they got back to the station. ®