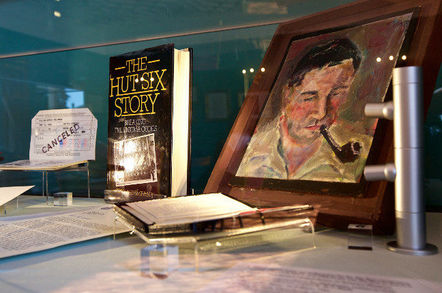 Welchman’s book and a portrait of him by his second wife, Fannie Hillsmith.
Image credit: Shaun Armstrong/mubsta.com

An exhibition has been launched at Bletchley Park to commemorate the work of Cambridge lecturer and "forgotten genius" Gordon Welchman at Britain's wartime codebreaking centre.

Titled Gordon Welchman: Bletchley Park's Architect of Ultra Intelligence, the exhibition is based on the book of the same name by the great man's biographer, Joel Greenberg, and opened on Friday to encourage public recognition of the wartime work of an unsung hero.

Despite Welchman's "invaluable" contributions to breaking Enigma, he has received less public applause than Alan Turing, his colleague both at university and Bletchley.

Welchman adapted Turing's Bombe designs to create the workable machine for decrypting German military messages through a device known as the "diagonal board". He also established and headed Hut Six, which decrypted more than one million German messages over the course of the war.

At the launch event last Thursday, Greenberg stated that it was Welchman who had founded Bletchley Park's production model for decrypting at scale, and developed the practice of producing intelligence through traffic analysis – a specialty of Hut Six.

The analysis programme, named "Sixta", was a fusion of traffic analysis and cryptography. In a personal paper titled A Personal Record, written shortly before his death in 1984, Welchman stated:

No-one else was doing anything about this potential goldmine; so I drew up a comprehensive plan which called for close coordination of radio interception, analysis of the intercepted traffic, the breaking of Enigma keys, and extracting intelligence from the decodes.

In 1982, Welchman – in his book, The Hut Six Story – published more details of the traffic analysis the Bletchley-based codebreakers had committed. The details provided led to Blighty's eavesdropping nerve centre GCHQ describing him as "a disastrous example to others", and Greenberg suggested the agency was particularly sensitive to the revelations of its traffic analysis programme.

Research papers on traffic analysis by the Government Code and Cypher School (or GC&CS, as GCHQ was then known) remain classified. Greenberg noted that upon his book's publication, Welchman – who eventually moved to America and became a US citizen – was targeted for prosecution under the same legislation as NSA master blabbermouth Edward Snowden.

At the time of its publication, Welchman was a consultant for the MITRE Corporation, which was working on communications security for the US Department of Defense. Welchman subsequently lost his security clearance, and therefore his consultancy role, and was prohibited from communicating with the media to discuss his work at Bletchley Park.

Welchman's vision for a secure tactical communication system can be found in the Joint Tactical Information Distribution System (JTIDS).

This is a fully operational command and control system, providing information, distribution, position, location and identification capabilities for the US Air Force, Army, Navy, Marine Corps, and British, French and NATO forces.

Gordon Welchman died on 8 October, 1985 at the age of 79 at Anna Jacques Hospital in Newburyport, Massachusetts.

Next page: The Ultra Secret
Page:
Tips and corrections
78 Comments