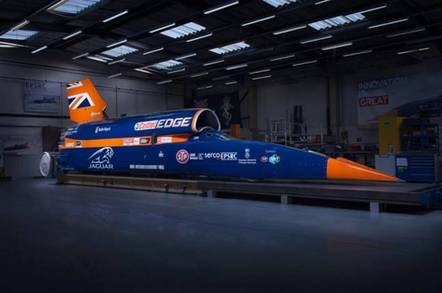 The Bloodhound Super-Sonic Car (SSC) has been shown off to the public for the first time, ahead of its attempt to break the world land-speed record next year. 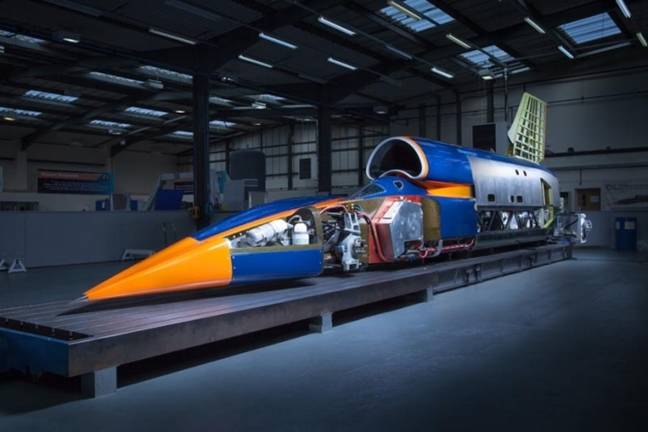 Lifting the hood on Bloodhound SSC

The 13.5m-long vehicle will use a Rolls-Royce EJ200 jet engine normally found in a Eurofighter Typhoon aircraft to reach 300mph, at which point the Nammo hybrid rocket kicks in and should get the car up to 800mph in the initial speed trial next year, and 1,000mph for the main run in 2017.

Unusually for an entrant to the land-speed record, Bloodhound SSC also has a conventional motor engine inside. The 550bhp Jaguar Supercharged V8 engine won't drive the wheels however, but will power the rocket oxidizer pump that pushes high-test peroxide into the Nammo engine at a rate of 40 liters per second.

"Public interest in The Project is incredible, and thanks to the generous support of our partners we are delighted to be able to bring Bloodhound SSC to London and put it on show," said project director and former land speed record holder Richard Noble.

"With the car now built and the track in South Africa prepared, our focus is on racing in 2016. That part of the adventure starts with runway tests at Newquay Aerohub next Easter."

This hack met Green shortly before he made the attempt and asked the inevitable "what does it feel like to go that fast" question. He responded that you don't really notice the acceleration after the first few hundred miles an hour, since the landscape is going by so fast and you're more concerned with keeping the car on the ground than what's going on outside.

Noble and Green have spent more than 30 years developing vehicles capable of winning the land-speed title. From 1929 to 1964 the record was exclusively held by British drivers, but then a new generation of rocket cars built by Americans came along and held the title for the next 15 years.

Noble broke the record in 1983 when he drove the Thrust2 vehicle to 633mph in the Black Rock desert, and promptly set about trying to beat that record with Thrust SSC, this time piloted by Green. This was achieved in 1997, and the two set to work on the plans for a new car that could break the 1,000mph barrier.

Although calling this thing a car is a bit of a stretch. The wheels aren't powered by the engines at all – the last land-speed record holder to use that method was Donald Campbell's Bluebird CN7, which reached 403mph.

Nevertheless, Green looks set to break the record next year, provided he survives the speed run. The car has been aerodynamically styled to stay on the ground, but takeoff is always a possibility when driving this fast.

For safety reasons, the cockpit has been specially strengthened to protect the driver, and the digital display is augmented by a mechanical backup speedometer that will allow Green to brake safely. Bloodhound SSC uses parachutes to slow down to 250mph, before the wheel brakes are applied – any faster than that and the solid aluminum wheels will catch fire.

While much of the money for the project has come from sponsors, there's also a significant amount of UK government funding in there too. As El Reg pointed out at the time, it's unlikely we'll see much return from all this, but it's still a serious piece of engineering. ®