FOUR STUNNING NEW FEATURES Cook should put in the iPHONE 7 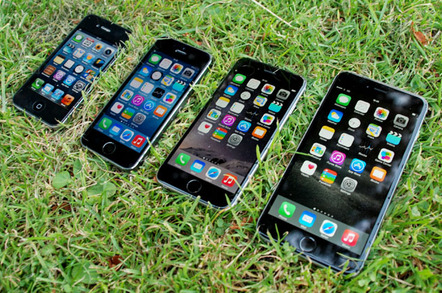 The next one could be a WORLD SHAKER

It's the eve of iPhone Day, the most magical time of the year, when fanbois' and fangurls' little faces light up as they tear open the packages tomorrow. It's the day that we celebrate the coming of a new Jesus Phone down to Earth to be seen amongst mortals yet again.

But there are a lot of, pardon us for shooting straight from the hip like the grizzled old tech warhorses we are, fools out there saying that the iPhone 6 range – in particular the iPhone 6 Plus – now offers everything a smartphone can offer, and so there's nothing new and exciting that Apple can bring to its seminal pocketslab. It's got everything: 4G, big screen, bonkpayment, fingerprint reader, the lot.

There's some truth to that, perhaps, in the case of tomorrow's 6S and 6S Plus. These are indeed no more than a slight upgrade of the 6 and 6 Plus. But frankly, that story is over. The unwashed rabble of the technology press already have review handsets, and in fact – horrifyingly – at least one actual non-journalist normal person has got one too. We here at the Reg – and just one other elite publication that we know of* – will not be wrestling with the other sweaty peasants in that particular media mosh-pit, thank you.

No, the spotlight has moved on conclusively to the iPhone 7: that's the real story now, and will be until shortly before it comes out. And the fact is, the iPhone 7 could be a real, market-devastating game changer. There are, absolutely no word of a lie, several major new items which could be added to it which would truly upset the Applecart.

Tim Cook has it in his power to do something genuinely transformative – but does he have the guts?

So without further ado, here are the stunning new technologies and options which could be added to the iPhone 7 to make it truly, groundbreakingly different. In some cases we've added possible branding.

Sure, you've seen all the fast-charge and wireless-recharge hype. It always turns out that actually it takes ages, the battery isn't really fully charged, if it is charged the level of charge drops massively soon after recharging, you need to fit a special battery which isn't very good ... or all of the above. And, no matter what, you always need a wall socket to plug the super-recharger gizmo into.

Well that's just not good enough. Not when there's a technology out there which can potentially take a phone from dead flat battery to full, stable, genuinely fully charged and do it in sixteen seconds or less – and all you need to do it is an easily pocketable device smaller than the phone which requires no power socket to work.

Our ace team at #VultureTRENDING exclusively revealed this stunning technology earlier this year, and verified it themselves in a videoed hands-on test. It's real, and Apple could implement it any time they want to. Right there, that would take the iPhone to a completely new level.

2. SUPER iCLOUD RETINA PRO™: Access all your overflow data with UNBELIEVABLE SPEED, TOTAL SECURITY – and even with NO INTERNET CONNECTION!!!

The existing iCloud is just great – it completely solves the problem of your iPhone's storage filling up, which is something that can definitely happen with all that 4K video: especially if you're a cheapskate and have only got the 16GB scum model. iCloud can go up to a terabyte at quite reasonable prices. Brilliant.

What if your new super iCloud, unlike the existing one, was secure against "Fappening" style hacking that could reveal your nude selfies or other embarrassments to the world?

Again, this technology has actually been developed to quite an advanced stage already. It could definitely be in the iPhone 7 if Tim Cook chooses to put it there.

That would be exciting. Who says iPhone launches have to be ho-hum from here on?