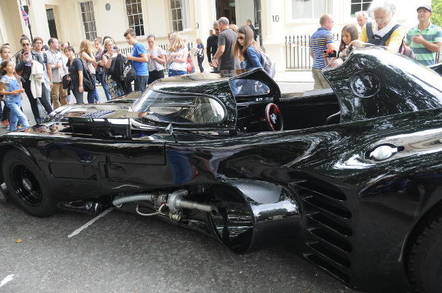 Riddle me this: what has four wheels, a jet engine, and will get you an angry call from DC Comics' legal department if you try to rip it off?

The Batmobile, of course.

A US court has ruled [PDF] that Batman's iconic ride was covered by the publisher's copyright.

The US Ninth Circuit Court of Appeals for Central California found in favor of DC against Mark Towle and Gotham Garage, a custom car builder who makes and sells replicas of the Batmobile and other classic movie and television cars.

DC had accused Towle of violating its copyrights by selling replicas of both the 1966 (TV series) and 1989 (movie) versions of the Batmobile without obtaining a license, while Towle countered that the Batmobile was not covered by DC's copyright and should be fair game for replicas.

The three-judge panel affirmed an earlier District Court judgement that the Batmobile is in itself a unique character in the Batman series, and as such could be considered part of DC's copyright holdings.

The ruling means that Towle and other Jokers who wish to build replicas or merchandise portraying the Batmobile will have to obtain permission from DC Comics.

"The panel held that the Batmobile, as it appeared in the Batman comic books, television series, and motion picture, was entitled to copyright protection because this automotive character was a sufficiently distinctive element of the works," the panel said.

"The panel held that DC Comics owned a copyright interest in the Batmobile character, as expressed in the 1966 television series and the 1989 motion picture, because it did not transfer its underlying rights to the character when it licensed rights to produce derivative works."

The ruling noted that not every character in a comic book or motion picture is entitled to copyright protections, and in previous cases courts have found that characters who don't meet the standard of "especially distinctive" cannot be subject to copyright.

In the case of the Batmobile, however, the court found that the car was distinctive enough in its design and "sufficiently delineated" in its portrayal through the series to be considered a character in its own right.

"As Batman so sagely told Robin," the ruling concludes, "In our well-ordered society, protection of private property is essential." Thus, the judges declared, it's the ruling that Gotham Garage deserves, but not the one it needs right now. ®

Analysis Big thumbs up to Internet Archive for now