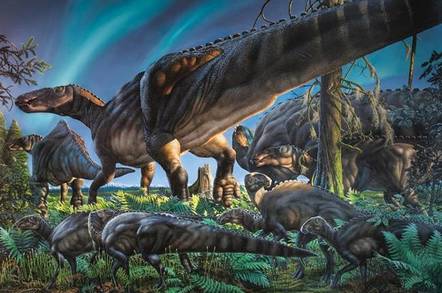 Everybody knows that the dinosaurs were cold-blooded, right? Lizards, cold blood, there you go. But maybe not.

A new species of dino, lately discovered among fossils found in chilly Alaska, has confirmed that the mighty lizardoids of the remote past could actually survive in much colder regions than had been thought - and this casts doubt on the traditional picture of the creatures' metabolisms.

The new fossils, found in the Alaskan Liscomb Bone Beds, were those of a duck-billed hadrosaur that munched on the surrounding vegetation. Dubbed Ugrunaaluk Kuukpikensis, the dinosaur was so far north that it would have lived in darkness for months at a time, and may even have lived in snowy zones.

"Today we find these animals in polar latitudes," said Pat Druckenmiller, Earth sciences curator at the University of Alaska museum. "Amazingly, they lived even farther north during the Cretaceous Period. These were the northern-most dinosaurs to have lived during the Age of Dinosaurs. They were truly polar."

The new species would have grown to around 30 feet long and were active around 69 million years ago. The team found about 6,000 bones in the deposit, primarily of juvenile creatures, and while the remains are similar to hadrosaurs found in more tropical areas, they are a separate species.

"Ugrunaaluk is far and away the most complete dinosaur yet found in the Arctic or any polar region," Druckenmiller said. "We have multiple elements of every single bone in the body."

The discovery will cast further doubt on the premise that dinosaurs were cold blooded, like lizards. While the poles of the planet were warmer back when the hadrosaurs roamed, they weren't that warm, and the Earth's tilt would have left the area without sunlight for months at a time.

"The finding of dinosaurs this far north challenges everything we thought about a dinosaur's physiology," said Florida State University's Gregory Erickson, coauthor of the paper in Acta Palaeontologica Polonica. "It creates this natural question. How did they survive up here?"

Over the last few years, the view that dinosaurs may not have been cold-blooded has gained considerable weight, with a paper last year putting forward the idea that they were an intermediate "mesothermic" stage, similar to today's sharks.

We may never know the truth, but it's clear that the range of dinosaurs into different climate zones shows that these creatures were capable of surprising diversity. ®