Scotsman cools PC with IRN-BRU, dubs it the 'Aye Mac'

PC bathes its bits in Scotland's other famous drink 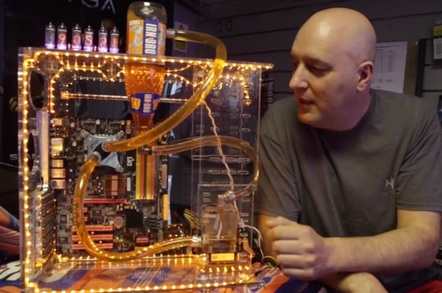 An enterprising Scot has built a PC cooled by Irn-Bru*, and called it the “Aye Mac”.

John Lawson, who runs an Edinburgh computer repair service called PC Doctor, decided to create the machine as a promotion and/or homage to Scotland's other famous drink.

Sadly Irn-Bru's not the actual coolant – a liquid with the same colour does the job – but Lawson's managed to get a bottle of the drink incorporated into the design.

Specs of the machine haven't been revealed, but Scots will tell you anything associated with Irn-Bru is simultaneously super-cool and super-hot, so it's probably a very impressive machine once the Bru starts bubbling.

It's also a more-than-decent case mod: certain corners of the internet beyond Scotland are going to be well impressed.

Irn-Bru as a computer coolant. The beverage that just keeps on giving. pic.twitter.com/7REwmAWPCh

* For the uninitiated, Irn-Bru – pronounced “Iron Brew” - is a Scottish soft drink so popular in its native land that it outsells Coke and Pepsi, thereby making Scotland one of the few nations on earth where one of the American colas aren't the best-selling beverage.

Irn-Bru is vivid orange and has a taste your correspondent finds rather more citrusy than cola and a syrupy mouth feel. The beverage is not widely available beyond the United Kingdom, but makes regular appearances in specialty stores catering to the homesick.

Avoids the light-fingered criminal element by using a light element