Microsoft to splurge $75m on computer training for kids 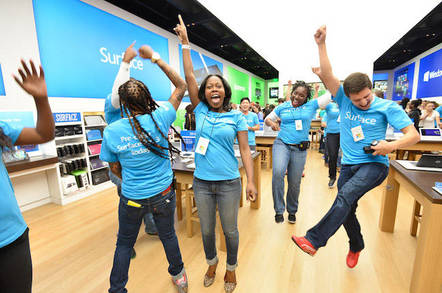 Microsoft announced on Wednesday (September 16) that it would dish out $75m to teach kids computer science.

The cash will be funnelled out over the next three years through the company’s YouthSpark programme.

The aim is “to increase access to computer science education for all youth, especially for those from under-represented backgrounds” globally. However, a spokeswoman told The Register on Thursday (September 17) that there are as yet no details on where that money would be spent.

According to the press release, “scores of non-profit organisations around the world will receive cash donations and other resources” to prepare young people for an increasingly digital world.

The aim is not, necessarily, for everyone to become a computer scientist or a software engineer, says Microsoft. “Computer science is a foundational subject — like algebra, chemistry or physics — for learning how the world works,” said Microsoft president Brad Smith.

In the past, the CoderDojo Foundation in Europe, the Center for Digital Inclusion in Latin America, Silatech in the Middle East and Africa and the YCAB Foundation in Asia, have all benefitted from Microsoft’s largesse. ®