And, erm, the update is actually worse than the old one 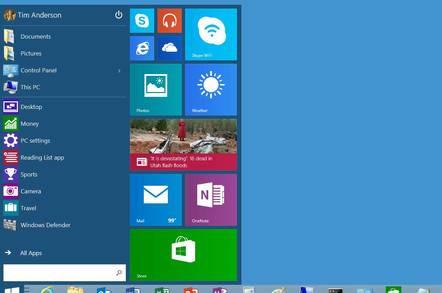 The Start Menu is back on Windows RT, but is it only a minor update

Microsoft has delivered a minor update to Windows RT, the ARM-based version of Windows 8 which runs on Surface 1 and 2 and on tablets from Lenovo, Nokia and others.

Windows RT is a locked-down version of Windows which includes the Windows desktop and Microsoft Office, but allows only Store apps to be installed.

The OS failed in the market, partly because of the weak Windows 8 app ecosystem, and partly because of its confusing name. Some customers bought Windows RT devices not realising that it would not run their Windows applications.

With Windows 10 Microsoft hopes to bring more and better apps to its Windows Store, thanks to a new Universal Windows Platform (UWP) in which apps run in desktop windows, rather than in a separate environment, and which supports multiple form factors, from phone to PC.

This will be no help to Windows RT owners though, since it will not run UWP apps. This update may be all users get in terms of new features, and there is not much to it.

Specifically, the update enables a Start menu in Windows RT, along with “circular frames for user account pictures” (please contain your excitement).

Note that the Start menu in Windows RT is not the same as that in the released Windows 10, which is built with XAML (the presentation language for Store and UWP apps), but is an implementation previously seen in early preview versions.

The update installed easily on a Surface 2 device, though it was not automatic – look for optional update 3033055 if you want to install this. Once installed, you can right-click the taskbar and select “Use the Start menu instead of the Start screen” from the Properties menu.

The new menu is in some ways an improvement over that in Windows 10. It is fast and hierarchical in the All Apps section. The Live Tiles pane auto-expands as you add more shortcuts. However, there is no option to run the new Start menu full-screen; if you want that, you must go back to the old implementation. There is no “Tablet mode”.

My guess is that many Surface RT users will do just that, since the new one is not an improvement. If you always use a Windows RT device like a laptop, the new menu may work better for you, but for touch use the older Start Screen is easier to use.

Despite its market failure, and annoyances like limited availability of printer drivers, there is a lot to like in Windows RT. It is less troublesome than other versions of Windows even though Microsoft never achieved iPad-like simplicity of maintenance; this might have come in a hypothetical future version with the desktop completely removed.

Windows RT is dead but Windows on ARM is not, surviving both on Windows 10 Mobile devices and on small devices such as Raspberry Pi.

Windows 10 also supports locking down a device in a similar manner, thanks to the Device Guard feature, which lets you protect the operating system and whitelist application installs. ®