SPACED OUT: NASA's manned Orion podule pushed back to 2023 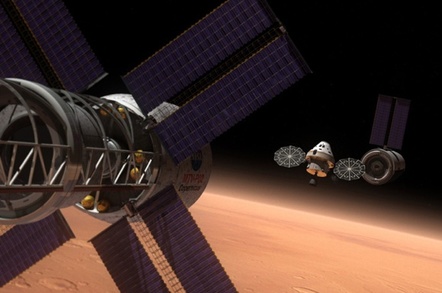 Let's just get it off the ground to start with, eh?

NASA's plan to carry out manned space missions beyond Earth's low orbit has stalled to 2023.

The American astro-boffins were aiming to deploy the Orion manned capsule in 2021, but the program has stumbled.

A prototype Orion capsule has already made a brief unmanned test flight atop a Delta IV Heavy launch stack, in December last year. However Orion is actually intended to be used with the upcoming Space Launch System (SLS) superheavy rocket, essentially a bulked-up Space Shuttle which is thrown away on use.

SLS is pencilled in to fly an unmanned Orion test in 2018, a mission designated EM-1. According to NASA, the next step is to send astronauts beyond Earth orbit for the first time since the Apollo 17 moonshot of 1972. The EM-2 manned mission had been intended to lift off in 2021, but now an agency statement, released yesterday, says this:

Astronauts will fly on Orion for the first time on EM-2. That mission will build on the results of the EM-1 flight with additional requirements that the Orion capsule includes fully integrated environmental control and life support systems; controls; and communications designed specifically for the human operation; and advanced launch and re-entry spacesuits for the crew. The recent review, culminating in what is known within NASA as Key Decision Point C (KDP-C), includes all of these technological advancements, and approval represents agency support for this work and the Orion program plan.

The decision commits NASA to a development cost baseline of $6.77 billion from October 2015 through the first crewed mission (EM-2) and a commitment to be ready for a launch with astronauts no later than April 2023. The commitment is consistent with funding levels in the president’s budget request.

“Our work to send humans out into the solar system is progressing,” added NASA chief Charles Bolden. “Orion is a key piece of the flexible architecture that will enable humanity to set foot on the Red Planet, and we are committed to building the spacecraft and other elements necessary to make this a reality.”

The plan for EM-2, as and when it does fly, isn't yet firm. But it certainly won't be a mission to Mars - nor even a new Moon landing, though that was originally the plan for Orion when it was conceived under the last Bush administration. Orion and its accompanying Ares launch rockets - plus various other bits and pieces, forming the so called "Constellation" programme - were intended to carry out a new wave of manned Moon missions, probably including lunar bases.

Having regained and strengthened the beyond-Earth-orbit capability it achieved so briefly back in the 1960s and 70s, NASA would then have moved on to put boots on Mars at last.

There was just one problem with that plan: NASA couldn't afford it, and President Bush was unable to persuade Congress to supply the necessary cash. When President Obama took over, following a lengthy review, he axed Constellation - but later reprieved Orion itself, in a decision smelling strongly of porkbarrel.

Since then, NASA has laid out new plans to ignore the Moon, build the SLS, and gradually develop it from its initial relatively feeble configuration (able to lift 70 tonnes to orbit) into a real heavy-lifter more powerful than the 118-tonner Saturn Vs of yesteryear. Such an SLS Block 2 would perhaps be able to lift an Orion plus the necessary lander and habitat for a manned Mars flight. In the meantime, early manned SLS missions would develop experience in human operations beyond low orbit and perhaps rendezvous with an asteroid or two.

There remain serious doubts as to just when - or if - NASA will be able to afford an SLS Block 2 with added Martian bells and whistles. Such a mission would be an awful lot like a re-animated Constellation, or indeed a return by a somewhat modified Saturn V (the space shuttle engines around which the SLS is to be built are developed from the same technology used in the Saturns - and their development began in the 1970s).

Given that NASA couldn't afford Constellation (and couldn't afford Apollo beyond 1972) it's hard to see why it can now afford the new SLS plan. However the plan does have the massive advantage that it keeps the bulk of the established, heavily politically connected Shuttle-era manned space workforce employed, so it seems likely to proceed - even if it doesn't seem very likely to put any boots on the red planet in the foreseeable future. Today's delay may be only the first of many.

A few years ago it seemed that there might be an outside chance of moving on from the bloated workforces, 1970s liquid-hydrogen technology and associated crippling costs of the NASA-Lockheed-Boeing alliance. That chance appeared to be offered by the famous upstart rocket business SpaceX, helmed by famous techbiz visionary Elon Musk.

It's no secret that SpaceX has designs on the drawing board for new engines and rockets that could make an SLS Block 2 look puny, and which would probably cost an awful lot less to boot. It's no secret that the manned version of Musk's Dragon capsule - intended for space station crew changes at present - is supposedly able to land on Mars itself, if it could get there. And Musk had expected by this point to have his Falcon Heavy rocket flying, which would have eclipsed the Delta IV Heavy and made SpaceX the operator of the world's most powerful space launcher until the SLS - or, perhaps, the proposed Falcon X superlifters - should arrive.

But the SLS, with its colossal porkbarrel political backing, appears to be a fait accompli. And SpaceX has lately suffered a serious setback when a Falcon 9 rocket boosting an unmanned Dragon supply flight to the ISS blew up shortly after launch, not only stalling the Falcon 9 flight programme but pushing back the Falcon Heavy as well.

So it'll probably be a long road to Mars, one way and another. ®