The ONE WEIRD TRICK which could END OBESITY

Department of the Bleedin' Obvious reports in after massive study 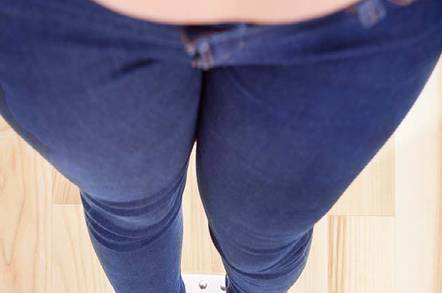 Research by a crack team from the Department of the Bleedin' Obvious indicates that the UK's growing fat crisis could be tackled by people stuffing less grub into their faces.

In fairness to the University of Cambridge nosh squad responsible for this shock conclusion, the actual finding is that "reducing the portion sizes offered in supermarkets, restaurants and at home would help reverse the obesity epidemic", as the BBC puts it.

This is simply because people don't like leaving food on their plates, and will trough the lot.

The solution, therefore, is to clamp down on "large portions", thereby cutting a person's daily diet by 279 calories.

The Cambridge researchers snaffled data from 61 clinical trials with a total of 6,711 participants, to conclude that the time has arrived, for example, for slimline shepherd's pie ready meals.

These, according to the British Heart Foundation's "Portion Distortion" report (PDF), almost doubled in size between 1993 and 2013. Plain bagels, meanwhile, swelled 24 per cent (from 70g to 86g), while "a fish and pasta bake ready meal had a portion size on average consistently 45 per cent larger than in 1993".

Dr Ian Shemilt, of Cambridge's Behaviour and Health Research Unit, told the Beeb: "This is the most conclusive evidence to date that people consistently consume more food and drink when given larger portions, packaging or tableware.

"Consumers do have a role to play – for example, all of us can reduce the size of plates or glasses we use and put pressure on the pubs and restaurants we visit by asking for a smaller portion."

Well, our own professional research shows that the average size of a pint has varied exactly 0 per cent since 1993, and there's no way we're going into the boozer and asking for a half.

We do take the point about inadvertent overeating, though. No doubt supermarkets will enthusiastically embrace the downsizing concept, giving them the chance to trim the excess while keeping the price the same. Win-win. ®