Oracle: Over here, look over here! At the cloud! No, not at our glum licensing numbers 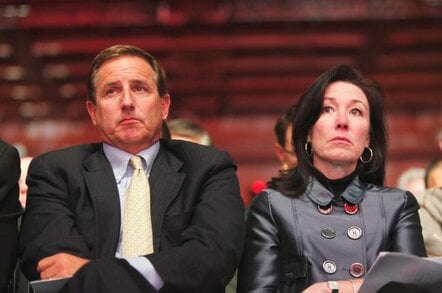 Enterprise IT giant Oracle is once again pointing to a growing cloud business to gloss over lackluster financial numbers in other parts of its business.

Big Red on Wednesday said that its $8.4bn in first-quarter [PDF] revenues (ending August 31) were down 2 per cent over the same period in 2014, when it logged $8.5bn. Earnings per share were 53 cents, just above analyst estimates of 52 cents.

Oracle stock was down 1.54 per cent in after-hours trading.

In reporting the numbers, Oracle co-CEOs Safra Catz and Mark Hurd played up the continued growth of Oracle's cloud operations. Cloud SaaS and PaaS revenues were up 34 per cent at $451m on the quarter, while cloud IaaS was up 16 per cent with a $160m take.

"We feel very good about the progress of our cloud transition and clearly customers are migrating to the cloud," Catz told analysts, noting that Oracle expects to see cloud numbers grow this year as more customers move to cloud services and money spent on building out cloud data centers comes off the books.

The rising cloud figures, however, were tempered by drops in other areas of Oracle's business. Software license updates and product support, which accounted for a whopping $4.69bn of Oracle's $8.4bn total quarterly revenues, saw a 1 per cent drop from the same period a year ago.

As in previous quarters, Oracle sought to qualify its numbers by blaming the declines in large part on a weak US dollar. Catz said the currency "headwind" was responsible for an earnings per share drop of six cents in this quarter alone. ®