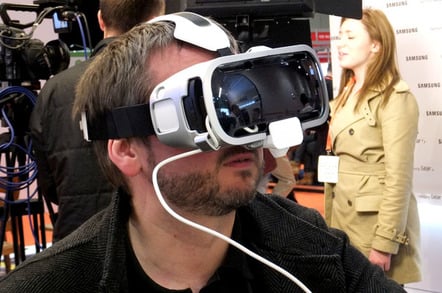 Crystal ball gazers at Juniper have looked far into the future and seen that by 2020 some 30 million virtual reality headsets will be shifted globally.

Hardware retail revenue from VR headset sales will exceed $4bn (£3bn) by 2020, it said. According to the analyst house the "watershed year" for the virtual reality will be 2016, with three million shipments expected.

Oculus, Sony, and HTC are all expected to launch key VR products over the next 12 months.

Nitin Bhas, head of research at Juniper, said North America will remain the biggest market for the devices, followed by the Asian market which will account for 10 million devices by 2020. This is being driven by China having recently lifted its 14-year ban on video consoles, he said.

According to Bhas, the tech will not just be the preserve of couch potatoes, but will be further used in military training, medical and nuclear facilities, as consumer mass production makes the tech cheaper.

He said: "The market just begun to flourish. The driving focus is on consumer side. But we believe the market will then expand."

El Reg wonder if there are some market opportunities here... ®