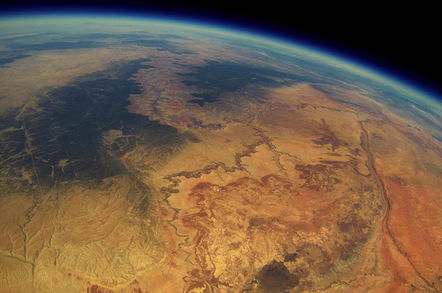 A GoPro frame from the flight, with the Grand Canyon at top left

A groups of lads from Arizona has posted a nice vid of a balloon flight over the US's majestic southwest – having finally recovered the footage two years after their payload went AWOL in the desert.

Bryan Chan, Ved Chirayath, Ashish Goel, Paul Tarantino and Tyler Reid sent a GoPro Hero3, Sony camcorder and Samsung Galaxy Note II aloft back in June 2013. According to Chan, they ill-advisedly relied on the mobile phone texting its GPS position back to base as their sole means of tracking the payload.

As High Altitude Ballooning (HAB) experts will tell you, this is a risky plan, as the team found out. One member explained: "We planned our June 2013 launch at a specific time and place such that the phone was projected to land in an area with cell coverage. The problem was that the coverage map we were relying on (looking at you, AT&T) was not accurate, so the phone never got signal as it came back to Earth, and we never heard from it."

"We didn't know this was the problem at the time – we thought our trajectory model was far off and it landed in a signal dead zone (turns out the model was actually quite accurate). The phone landed ~50 miles away from the launch point, from what I recall. It's a really far distance considering there's hardly any roads over there!"

Miraculously, a couple of years later, "a woman who works at AT&T was on a hike one day and spotted our phone in the barren desert".

She took the mobe to an AT&T store, which identified the owner from the SIM, and the chaps were later reunited with their payload.

For future missions, we'd advise some form of radio tracking system, like that which back in 2013 enabled the Low Orbit Helium Assisted Navigator (LOHAN) team to recover our plucky Playmonaut after he unexpectedly crash-landed on a Spanish mountainside. ®