Super Cali's Governor Brown something, something ... ah screw it 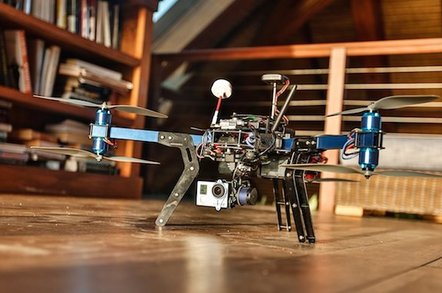 A law proposed in California that would have banned drones from flying below 350ft over private property without permission has been vetoed by the state's governor.

Gov Jerry Brown reckoned the rule would "could expose the occasional hobbyist and the FAA-approved commercial user alike to burdensome litigation." In other words, it was too easy to break accidentally.

"This bill would enact trespass liability for anyone flying a drone less than 350 feet above real property without the express permission of the property owner, whether or not anyone's privacy was violated by the flight," Gov Brown wrote [PDF] to members of the California State Senate on Wednesday.

Rather than sign off the legislation, the Democrat governor has sent the bill back to the senate, adding: "Let's look at this more carefully."

The bill was supposed to outlaw, for instance, camera-fitted quadcopters flying over people's homes to spy on them – like the drone shot out of the sky by a dad in Kentucky in July. The bloke feared the gizmo was eyeing up his daughters in their backyard.

The proposed law was introduced in January this year by State Senator Hannah-Beth Jackson and Assembly member Ian Calderon. It was passed by the assembly (56 ayes, 13 noes) on August 24, and by the senate (21 ayes, 12 noes) three days later, before being nixed this week.

Meanwhile, earlier this year, Cali's politicians were considering allowing firefighters and cops to shoot down disaster-gawping drones in emergencies without fear of lawsuits. This is still being debated by assembly members. ®