That padlock on your bag? Easy to open by anyone now 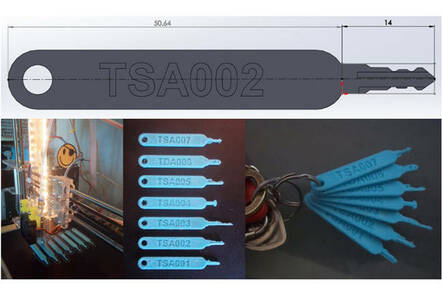 The integrity of more than 300 million travel locks has been compromised after 3D printing files for a range of master keys were posted online.

In other words, if you have a luggage lock with a keyhole for the authorities to use (saving them from smashing open your padlock), people can now print their own keys to open your bags.

A number of amateur 3D printers have printed the skeleton keys using the blueprints, and posted photos of their successful attempts at opening Travel Sentry locks on social media.

Reports point to the source of the files as being a high-resolution picture from a Washington Post story about the US Transportation Security Administration (TSA) that was published last year – an image that has since been taken down, but is readily available online. A quick search also turns up more high-quality images of the seven master keys.

The locks are officially approved by the TSA and come with a small red triangle to identify them. The lock also identifies which of the masterkeys is needed to unlock it by printing a simple code next to the lock, e.g., "TSA002."

Anyone leaving a US airport is liable to have their luggage searched, so the idea is that by having approved locks that can be opened by masterkeys, travelers can allow security officers to access their luggage without having to break into their bags. If you use a non-TSA approved lock, you could find it cut off.

The masterkeys are kept hidden away by the TSA, but the thousands of copies made for security staff to use have inevitably led to pictures finding their way to the internet; the Washington Post story being the most public outing.

It is also likely that professional thieves have had copies of the masterkeys for some time, since it is possible to reverse engineer them by buying a range of locks and using the keys that come with them to figure out what the masterkey pattern is.

Due to the keys' simplicity though, it is possible to create copies from just a picture. The previous small-scale efforts have now been blown up thanks to the ready availability of 3D files and 3D printing machines, putting access to all 300 million locks into the public realm. As a result, it presents a serious security problem for those who believe they are protecting their valuables in locked bags.

No one is sure yet what impact the availability of master keys will have. It certainly raises the risk of people's valuables being stolen either on holiday or if they use their bag with the Travel Sentry lock in their normal day-to-day lives.

Suffice to say, the age-old advice of staying close to your bags continues to be the best defense against theft. ®

TSA to pull backscatter perv scanners from US airports