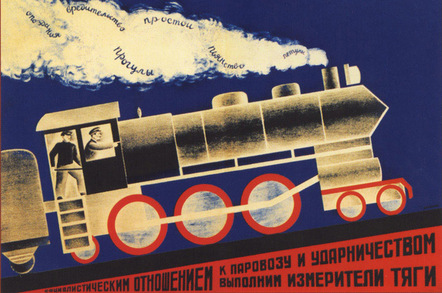 "The train station is 'socialism' to 'communism'" (http://sovietposters.com/showposter.php?poster=742)

Jolla was created as Sailfish and escaped from the burning platforms of Nokia to develop the MeeGo (formerly Maemo) Linux OS for phones. Nokia abandoned that, taking key developers to the startup.

This year, it sidelined hardware design to focus on software licensing – and looked all set to follow the downward spiral trajectory of so many abandoned mobile platforms.

Yet earlier this year, it received a fascinating boost from a very unexpected quarter. Wary of Google's market dominance and data gathering, Finland's historical enemy Russia has expressed a desire for tech independence, and Russia’s minister of communications and mass media, Nikolai Nikiforov, publicly suggested Sailfish could be part of the story.

The experience of the Chinese market has proved that mass-market Android smartphones can flourish without Google's involvement. In addition, the transformation of WeChat into a massive e-commerce and media platform, and the diversity of the other commerce sites, shows that Silicon Valley-style "innovation" may actually flourish faster outside Google's all-encompassing influence.

So back in May, a new "Finnish-Russian-Chinese" joint venture was announced, looking for investors from India, Brazil and South Africa.

Nokia began work on what today is Sailfish in 2002, and the first device to use the OS – a tablet – shipped ten years ago. In 2008, Nokia announced the platform would support mobile telephony and the following year it was formally anointed by Anssi Vanjoki as the modern successor to Symbian.

But development was derailed by corporate infighting, a merger with Intel's Linux, nebulous New Age design concepts (such as "Activity Theory"), and crucially, a lack of interest from the industry to license the platform.

The latter was a serious issue: Nokia didn't want to be the dominant owner of an open platform, bearing all the costs of development and promotion – and by 2011, Android was a runaway success. As part of his "Burning Platforms" strategy, the incoming CEO Stephen Elop first relegated the Linux OS to a research project, then let it go completely. ®