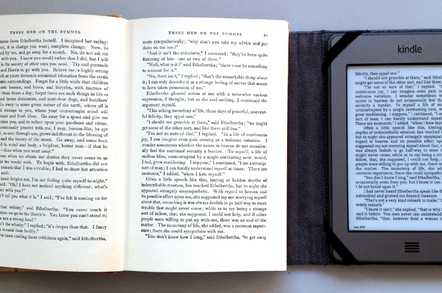 Worstall on Wednesday One of the things those within economics think that the subject gets generally correct is microeonomics, which itself is generally a discussion of the price system. There are those who insist that this is all well, true, insisting that since we're not all rational agents, don't have perfect knowledge, then that standard neoclassical model is wrong.

This then means that the Fat Controller should be telling us all what to do, which doesn't seem all that much better to be honest.

However, the real point here is not what is absolutely and exactly true down to the last detail, but what theoretical framework explains much of our world pretty well? At which point a quick peek at what's been happening to e-books ever since publishers raised prices might be instructive:

When the world’s largest publishers struck e-book distribution deals with Amazon.com over the past several months, they seemed to get what they wanted: the right to set the prices of their titles and avoid the steep discounts the online retail giant often applies.

But in the early going, that strategy doesn’t appear to be paying off.

Further, since the publishers regained from Amazon the ability to set prices they have raised them and this coincides with the fall in their general revenue from those products.

In detail there's an interesting little pricing puzzle here. Selling a physical book comes with marginal costs per sale: there's the cost of printing and distributing that last book that you've just sold. Thus one cannot adopt a pricing policy which aims to maximise gross revenue: to do so would lead to less profit than adopting one where the marginal book sold covered its marginal cost.

With an e-book the pricing policy should, to maximise profit, be to maximise that gross revenue received. For there's only one set of fixed costs (getting the book written, proofed and uploaded, marketed, assuming that the writer is only ever on a profit share or royalty) and any revenue gained at all from the sale of that last marginal sale is an addition to profit.

All of which is remarkably like what the advice from the standard neoclassical pricing model would be. And we are seeing here that raising prices does lead to a fall off in sales. And, given the cost structure of producing e-books a subsequent falling off in profits.

Do note that the neoclassical model does not say that all firms immediately adopt this wondrous pricing model: only that after however many iterations of trying to maximise profits then that's where the equilibrium will settle down (that this all happens immediately is something found only in the more extreme versions of the models).

We've also another example of something from the standard model, that everything is substitutable. Here is meant that there's a replacement for absolutely anything. Don't like the price of these goods or services then there's something else that can be done or used instead. Wheaties are obviously a substitute for Frosties, but it's much wider than that. A really good play with oneself is just as much something one can do with one's leisure hours as reading an overly expensive book. Meaning that this bloke is wrong:

One high-level publishing executive disputed that the Amazon pacts are behind the e-book sales decline. “This is a title-driven business,” he said. “If you have a good book, price isn’t an issue.”

Again, the standard model doesn't say that there won't be people wrong in that manner. Rather, it insists that they'll get schooled over time in the wrongtitude of their beliefs. As it seems that they are being.

Higher prices reduces sales. Who knew that demand curves slope downwards? Except, obviously, everyone who has ever cracked open page one of the Econ 101 course.