If you have any poo, fling it now 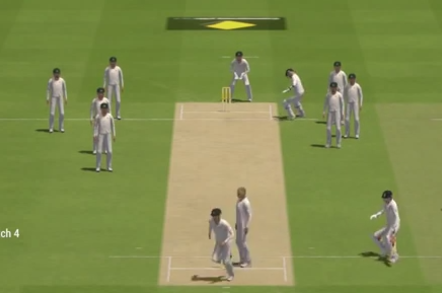 Top-level bone fondlers delving back into humanity's remote past say that the key adaptation which lifted us from the ruck of other primates was a change to the shoulder permitting us - among other things - to play cricket by hurling balls and wielding bats.

"These changes in the shoulder, which were probably initially driven by the use of tools well back into human evolution, also made us great throwers," explains boffin Neil Roach. "Our unique throwing ability likely helped our ancestors hunt and protect themselves, turning our species into the most dominant predators on earth."

Roach has made such suggestions before.

Primitive monkeys, apes etc are of course well known for their poo-flinging antics, but it seems that in fact they are ill-suited physically to this task and if modern humans were to throw dignity to the winds (along with some faecal matter) the monkeys and other primates would come off worst in any contest.

Roach and his colleagues discovered this superiority in humans by investigating our evolutionary history, doing so by examining the shoulder structure of various pre-humanoids such as Australopithecus afarensis, A sediba, Homo ergaster and Neanderthals.

"The mix of ape and human features observed in A afarensis' shoulder support the notion that, while bipedal, the species engaged in tree climbing and wielded stone tools. This is a primate clearly on its way to becoming human," explains anthropologist Zeray Alemseged, who worked on the study with Roach.

Quite apart from the primitive stone axe or hammer, A afarensis was also developing the attributes which would one day let it wield the trusty bat that is the mark of an advanced civilisation with time to devote to leisurely, non-warlike pursuits.

There's a down side to our super sophisticated shoulders, however: they're comparatively flimsy and prone to breakdowns such as rotator cuff injuries. Roach, Alemseged and their colleagues speculate that one day, it will be possible to assess a person's susceptibility to such problems genetically.

"Once we understand how the shape of the shoulder blade affects who gets injured, the next step is to find out what genes contribute to those injury prone shapes," enthuses Terence Capellini, biology prof. "With that information, we hope that one day doctors can diagnose and help prevent shoulder injuries years before they happen, simply by rubbing a cotton swab on a patient's cheek to collect their DNA".

Or, indeed, such methods might be used to decide which men would make good cricket players - or which schoolgirls would be well suited to the game with the round bat.

The research is published in the august Proceedings of the (US) National Academy of Sciences. ®

We'll add the same note we did on the last occasion that cricket, round-bat games and poo flinging came up:

There is much argument about the history and ancestry of rounders, baseball, cricket etc, with some Americans arguing that baseball - despite resemblances of equipment, layout etc - is not actually descended from the schoolgirl game of rounders (and some saying that the totally dissimilar sport of cricket really is).

One might put all that to rest by pointing out that no less a source than the Hitchhikers' Guide to the Galaxy books reveals that cricket is in fact derived from symbology attaching to an ancient galactic war of genocide far pre-dating the planet Earth itself, and as such has nothing to do with modern round-bat doings.