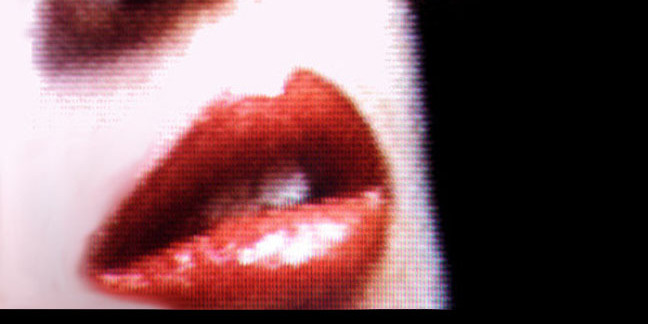 Pics Well, this changes everything. Apple's been fiddling with its Apple TV gogglebrick.

The new fatter, faster and more expensive black puck was unveiled alongside a new iPad and iPhone and as usual was hailed as a revolutionary change.

"The TV experience hasn't changed that much in decades," said Apple CEO Tim Cook. He then outlined Apple's "vision" – a vision that is "simple and perhaps a little provocative."

In reality, the changes simply catch up with its main competitor in the streaming box market – Roku. Roku's latest version, the Roku 3, includes all the features that Apple was so excited about: voice control; adding new apps; searching across apps for films or TV shows; faster hardware.

Up until now, the Apple TV has been locked down – Apple adds new apps to the home screen as and when it liked and you were unable to add your own or even remove those you don't want. In its latest iteration, Apple has simple extended its iPhone and iPad approach of an App store, and opened up the TV's operating system to developers.

In that sense, the new Apple TV is a welcome expansion. In addition, improvements to the user interface should make the experience more engrossing. 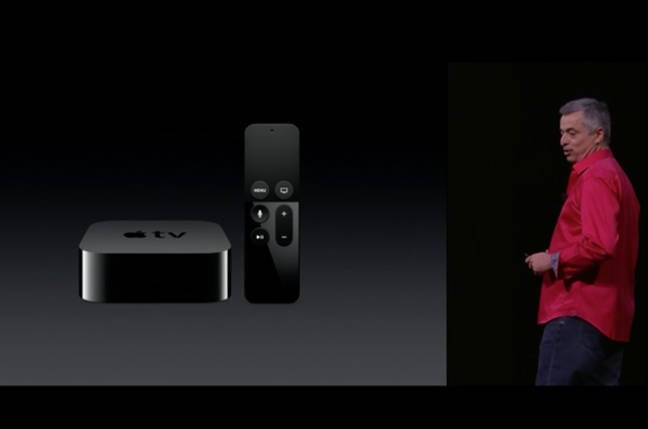 Oooh, get you. Eddy Cue happy with his new Apple TV

What puts the Apple TV at the head of the market, however, is two things: the new remote and Siri integration.

The new remote includes an iPhone-style glass swipescreen at the top that lets you swipe through options rather than having to click-click-click. This alone brings the Apple TV up to date. Although it doesn't include the force-touch or "3D touch" to measure pressure... these have been rolled out in the new iPhone and new Mac models. So in that sense Apple TV remains one step behind.

On the same line, the Apple TV gets the 64-bit A8 chip – but this is also one step behind the new A9 chip announced in the new iPhone and iPad.

Secondly, the Siri integration means that you can use voice controls to find things to watch. Voice control is a big step forward when using a TV – once you get used to it (like on the Roku), having to scroll around or click on an electronic keyboard to find things seems like an unnecessarily slow pain.

What Siri threatens to offer, according to the live demo, is intelligent searching. Examples given were "show me anything with Jason Schwartzman..." (each to their own). Or "show me funny TV shows."

New Apple TV UI, controlled from your thumb on the remote's touch-sensitive surface (or by voice with Siri) #AppleEvent pic.twitter.com/8fr3NhDwf0

"Siri will open information at the bottom if I ask it a question, not getting in the way of the movie" #AppleEvent pic.twitter.com/ASqAlMYRj0

Critically, the voice control appears to be able to boil down choices. So you can ask for all James Bond films and then say "just the ones with Sean Connery" to reduce the number of choices. Another example on stage was: "Show the Modern Family episode with Edward Norton." If this kind of searching can be reproduced widely it will be hugely useful in finding content.

Apple has also added games to the Apple TV. Games on streaming devices are limited, but Apple has given it a good shot. It has included an accelerometer and gyroscope into the remote control so that greater gameplay is possible, and this means that slightly better games than Tetris are available. But is it a gamechanger? It seems unlikely. Gamers will still want their dedicated consoles.

Play games from your Apple TV. Using your thumb. Frogger. This is why Google is dying on the vine. #AppleEvent pic.twitter.com/skIE3YZDdP

By opening up to apps, the Apple TV will also allow things like real estate apps (Zillow), fitness apps, shopping apps, and so on to be added to the TV. Again, it's not sure that people will want those apps on their TV when they can access them on their phone, but time will tell. It pulls the Apple TV further into the Apple ecosystem.

One app that was demoed that did seem to add genuine innovation was the MLB baseball app that will let you jump between games and bring up live stats and split screen while watching games. Again, this isn't completely new, but it is done well and it will be one more reason to grab an Apple TV.

What Apple did not announce

So, a useful upgrade. But what did Apple not include in the new Apple TV that would have really changed the game?

Firstly and most significantly, it did not announce any deals with cable companies. This is something that the company has been working on for years and was apparently behind the delayed launch of the TV (it was originally scheduled for three months ago).

Apple has clearly failed to get agreement with the big cable companies so it can get access to all their content. And that means the Apple TV is still not a TV replacement for most people.

Talking of content, there were no new content apps announced. The apps that already exist – Hulu, Netflix, HBO, and so on – will also be there. But it looks as though the choice is much more limited than is accessible on the more open Roku. No Vudu, for example. And, critically, no Amazon Prime Video – something that shows the inherent problem that exists with the Apple TV: that the company is in direct competition with some of the companies that should really appear on its device.

Screensavers for a TV? That's a feature. And if you don't like it, enjoy your Linux panic boxes, nerds #AppleEvent pic.twitter.com/Ca9hcirxW6

There was also no mention of Apple's internet of things system, HomeKit. This was very odd, given that the Apple TV is currently the only way to run Siri over the system. It is possible that HomeKit is in the specs and Apple decided it wanted to talk only about content with its launch today. But we suspect that the whole HomeKit setup is still trying to get on its feet after a last-minute design change that has forced manufacturers to include a special Apple chip in their products. 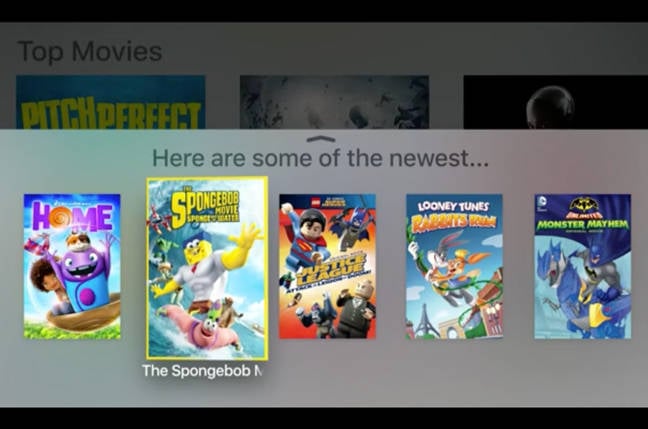 One big downside is that Apple's expanding universe of products risks overloading app developers. Now you need to produce versions for iPhones and iPads, plus the Apple Watch, and now the Apple TV. That's a lot of extra work for an uncertain new audience – will people really look at apps on their TV rather than their phone?

And lastly, the new remote control will need to be charged. According to Apple's senior vice president of Internet Software and Services, Eddy Cue, a single charge will last three months (what's the bet the reality is little more than a month-and-a-half?).

The control has a lightning connection to charge, i.e., it doesn't work off batteries. This is an entirely new idea for people to deal with when talking about a TV. We have never gone to put the TV on and found that it won't work because the remote needs charging. Hopefully Apple will make sure that an Apple TV remote app is available so people can use their phones as an emergency backup device.

So, in summary, a great update. This pushes the Apple TV to the head of the streaming device market. But then Roku is in the wings with its Roku 4 that may give it the lead again. The truly innovative aspect that people were hoping for though – a true cable alternative – did not appear. So no revolution this year.

The new Apple TV will be available from "late October." A 32GB version will cost $149; 64GB will cost $199. The operating system will be opened up to developers from today. The TV remote includes Bluetooth 4.0 (so direct line-of-sight not needed); the box has HDMI and Ethernet ports. ®