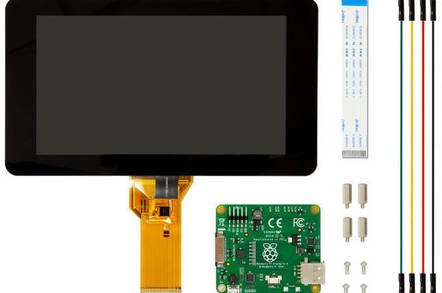 The Raspberry Pi Foundation has given its seal of approval to a 7-inch touchscreen for its flagship microcomputer.

The makers of the hobbyist quad-core ARM-powered system said the $60 screen will allow display and touch functions to be accessed from software. Drivers for the screen are included with the latest version of Raspbian.

It effectively means the end of hunting for a spare HDMI monitor to plug into the single-board computer – now a small handy display can be whacked on it, which for many applications is much more practical.

The display sports an 800x400 resolution and connects to the Pi via an adapter board and DSI cable. The screen draws its power from the Pi's power supply. Models supported include the Raspberry Pi Model A+, B+, and Pi 2 Revision B.

Gordon Hollingworth, director of engineering for the Raspberry Pi Foundation, said in a blog post that delivery of the display was actually long overdue, pushed back from an original target of 2013.

"Two years ago, I began the process of looking for a simple, embeddable display for the Raspberry Pi. I honestly believed it would only take us six months from start to end, but there were a number of issues we met (and other products diverted our attention from the display – like Rev 2.1, B+, A+, and Pi 2). But we've finally got there," he said.

The touchscreen can be purchased for $60 (£48) from the RaspberryPi.org store. ®