Broadband powered by home gateways? Whose bright idea was THIS?

Broadband Forum eating the fruit of the idiot tree 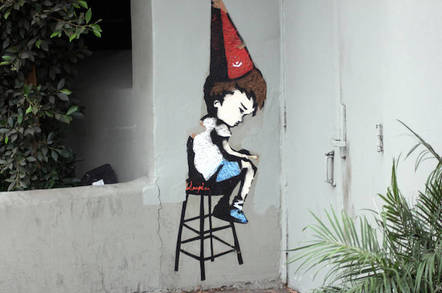 Fibre-to-the-node can help squeeze the last drop of sweat out of copper telephony networks, but it has a problem: nodes need electrons, and there might not be a copper path upstream to the exchange for 48V power. So the standards body The Broadband Forum thinks powering nodes using household electricity is a good idea.

The idea is put forward in a work of staggering genius called TR-301, promoted with the breathless blather of a Broadband Forum press release here (The Register will concede that calling its idea "radical" is accurate).

Clearly, the forum's carrier/operator and vendor members fear that the need to power FTTN/fibre-to-the-distribution point (FTTDP) nodes might put them at a disadvantage compared to all-passive fibre rollouts.

With the exception of RIM-style architectures, today's copper network has no need for active equipment between the exchange (or central office, in US terminology) and the customer. The only electricity came from the carrier end - the 48V DC feed that powered old-style phones - and network topology was designed without worrying about the need for power.

Active nodes, however, need electricity, and the closer to the customer the nodes are installed, the greater their number – and the more a carrier is going to have to negotiate with electricity utilities to get a grid connection.

Hence the notion of getting power fed from a customer side, since (someone has clearly reasoned) if the nodes only need a few hundred watts, who's going to care?

As noted over at TelecomTV, the issue becomes contentious as soon as it's out of the hands of technologists and in the hands of business and legal types.

A blackout in one premises could knock out services for everyone connected to the node and the carrier is getting a free ride from whoever's powering the node.

Vulture South would add this: given the notoriously dreadful state of home broadband gateway security, putting power control in such devices is an act of wilful folly.

The document is, naturally enough, private to Broadband Forum members, and even though BT is helping direct the work (along with Ericsson), the Brit incumbent isn't being sufficiently silly as to test premises-fed node-power in any of its UK G.Fast trials. ®

How it all happened (clue: unsigned library loaded)

IT titan Exertis chows down on AV specialist Medium