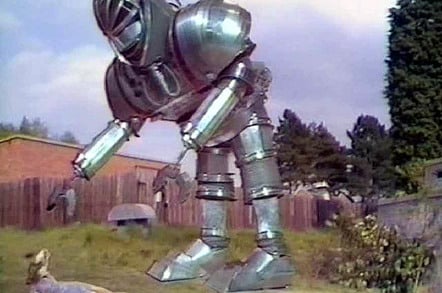 A 60-year-old man has been arrested in Japan following a violent encounter with a robot on Sunday, with the mechanoid coming off worse.

Named as Kiichi Ishikawa of the city of Yokosuka by the Kanagawa Prefectural Police, the Butlerian jihadi was described as "drunken" by the Japan Times, who reported on the latest incident in the nascent war between mankind and machine.

The police statement reveals that the drunk sexegenarian entered a branch of SoftBank on Sunday morning, where he took offence to the attitude of a store clerk.

In a fit of rage, as the Japan Times reported, Ishikawa then rounded on a nearby Pepper robot (video below) and struck the machine a crippling blow.

Those investigating the incident said that the damaged tincandroid now "moves slower" and added "that its internal computer system may have been broken".

Ishikawa was seen kicking the robot on security footage, the Kanagawa plod stated. He has coughed to damaging property. ®