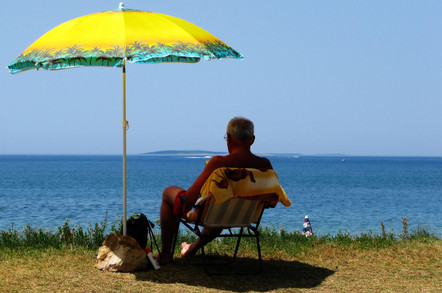 UK techies can pick and choose where they want their next job to be – so much so that many of them took the summer off completely to sip on pina coladas and top up their tans.

That's the finding of a new survey, which revealed that according to a seasonally adjusted index measuring permanent vacancies in the IT sector, demand to fill permanent staffer jobs in the IT market had risen to 64.4 per cent in the dog days of August, up from 62.8 per cent a month earlier.

But IT workers were pretty relaxed about the whole thing, apparently opting to enjoy the sunshine while it lasted before plonking for a job in a cold, dark server room.

Meanwhile, demand from Blighty companies to hire temporary techies fell to 58.7 per cent from 59.1 per cent in July.

"There was no respite for recruiters in August, who were left struggling to fill vacancies after a vast swathe of Britain’s jobseekers appeared to take the summer off," said KPMG partner Heath Jackson.

"Many candidates may have simply shelved their plans for the summer, believing their prospects to be stronger in September. However, this is of little comfort to those businesses needing staff now to meet demand for their goods and services."

KPMG's Report on Jobs is produced every month with Markit Economics.

Heath added that firms needed to offer more than just cash to lure techies to fill job vacancies, including beefy benefits packages, such as flexible working. ®

Autonomy Trial Now you can do exactly what she didn't: Pore over it – download our obtained copy of the report

Autonomy Trial What do you think I am? A chartered accountant?