So Quantitative Easing in the eurozone is working, then? 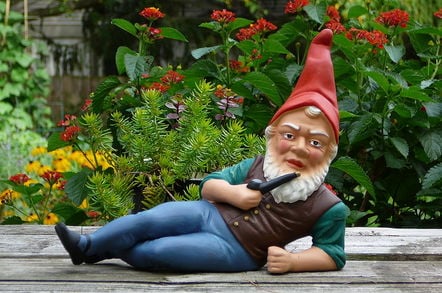 Put that in your pipe and smoke it

Worstall @ the Weekend Much as some of us love international biz editor Ambrose Evans-Pritchard over in The Torygraph, it is true that he can occasionally get a little bit excited about whatever it is that he's spotted.

His latest revelation about how eurozone money supply is growing is a case in point. Evans-Pritchard is looking at this information and thinking that it's about to presage a great deal of inflation.

I'm looking at the same thing and thinking “Quantitative Easing is working, then!”. I think I'm right here but then, of course, I would say that. So, let's see if I can convince you, dear readers.

Eurozone money supply is surging at a blistering pace as stimulus gains traction, signalling a powerful economic recovery over coming months and raising the risk of a major sell-off in bond markets. The growth of narrow M1 money surged to 12.1 per cent in July (PDF), higher than the peak levels seen a decade ago when the EMU credit boom was reaching a crescendo.

Such explosive rates of growth are usually associated with over-heating. The M1 figures cover cash and current accounts. They are watched closely by monetarists for clues of future spending and economic vigour six months or so ahead. 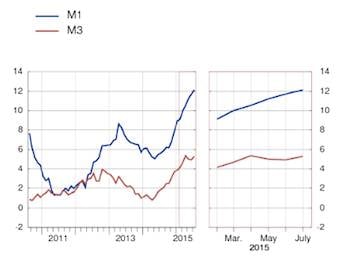 Armed with the run through of theory we had here and here at El Reg, we can potter through what might be happening now.

Our basic theory revolves around the equation MV=PQ.

Money times the velocity of its circulation equals prices times quantity demanded. This is the “quantity theory of money” and is generally associated with St Milton of Friedman but is also widely accepted, in a manner which some of his more extreme pronouncements about markets and liberty aren't. It's also a real equation, in that we do think that changing either M or V will change either P or Q and so on through the possible permutations.

In normal times we tend to worry about changes in M. This is best thought of as that "M1" in the ECB chart above. The money that the government, the central bank, creates. It's a bit more than just coins and notes in circulation but it's the bit that government, in a fiat money system, really does control. When we multiply M by the V we get something very much like M3 or M4: that's the total money supply after the influence of the banking system in creating credit, and so on.

The basic monetarist idea is that we need to have a gentle expansion of M in order to cater to the expansion of the economy. In much the same way that a restaurant handling more covers needs to have more plates and cutlery around, an expanding economy needs to have more base money (another name for M0 and or M1). And we can influence V a bit by fiddling with interest rates. Higher rates will mean fewer people wanting loans and thus reducing the multiplier that V provides on M4 after the banking system, lowering them reverses this.

Yes, this is an explanation that will horrify the purists and those who really know this topic: but it's all a useful simplification.

Here the idea is that if we all spot that there is too much money around, or see significant inflation (which is a symptom of there being too much money around) then our behaviour changes. We'll race off to spend whatever money we have immediately, knowing that the purchasing power is decreasing by the week. Or, as with the Hungarian pengo post-World War Two, by the hour, in fact. So, we'll convert that pile of banknotes into anything else physical we can. And that increase in V is obviously going to, even if we had a stable M, increase P as Q just cannot react that quickly.

Thus hyperinflation can best be thought of as hypervelocity of money circulation: once M has got out of hand, our desire to steal the wheelbarrow not the money it's carrying means that it all multiplies.

Next page: A little inflation greases the economy
Page:
Tips and corrections
119 Comments