There's only one likely customer for Oracle's hyperscale silicon: Oracle 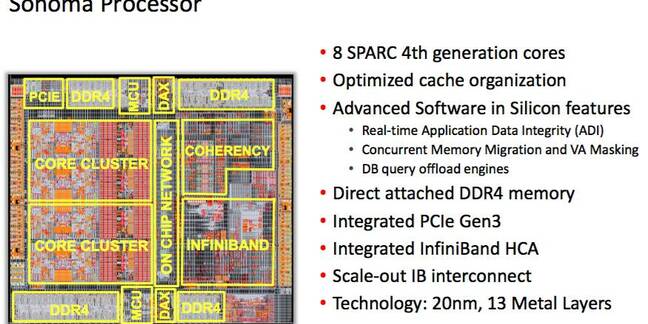 Comment Ever since Oracle revealed its new hyperscale Sonoma SPARC chippery, I've been trying to figure out who would buy it and why.

And I can think of only one customer: Oracle itself.

There's very little enthusiasm around the world for clouds built on anything other than x86. Sure, the occasional ARM server has made inroads here and there, and the likes of Cavium and HP (with Moonshot) are having a crack at the market. But The Reg is yet to see broad enthusiasm for clouds built on anything other than x86. Intel being Intel, it's being thoroughly paranoid and throwing cash at the problem to make sure it remains number one. The Xeon D looks like it will do the trick by just-about matching ARM on power consumption and core density. Facebook's decision to bake Xeon D into a hyperscale OpenCompute server looks a lot like vindication of Chipzilla's plan.

Which brings us to Oracle, which has committed its future to the cloud and, for those who insist on running their own servers, to highly integrated kit in which software and hardware are mutually optimized. Oracle's also committed to SPARC until at least 2019.

SPARC's not a huge money-spinner. If it were, Sun might have been able to keep itself independent. But just keeping a processor architecture alive costs a stack of money every year. Oracle surely knows that unless it can find more SPARC customers, the architecture's sustainability will be questionable.

So why not build its cloud on SPARC? Doing so would give the architecture a massive customer, for starters, while also making SPARC something all its SaaS customers are effectively paying for. Denying Intel a few thousand Xeon sales a year may also sit well in the Oracle boardroom, given that Intel is nominally a competitor.

Clouds are like Willy Wonka's chocolate factory: nobody knew Wonka products were made by Ooompa Loompas but everyone loved them anyway. Over time, Oracle should be able to run its cloud on SPARC without its SaaS customers noticing any change in flavor or quality. A web server is, after all, a web server. Perhaps Oracle can also make Engineered Systems running SPARC and tell a hybrid cloud story that offers deep integration and mutual optimization from on-premises bit barn to elastic cloud compute and SaaS.

Can Oracle pull this off?

The company's core business is now applications, and applications are the stickiest incumbency around. If Oracle's customers are going to stampede to SaaS, it may be able to get away with a SPARC cloud. It's harder to see a hybrid SPARC cloud succeeding, because that sticky incumbency of on-premise apps would need code revisions to get to SPARC. Business won't do that. It's just too risky.

But not as risky, perhaps, as continuing to offer SPARC without the prospect of it finding big new customers. And as Oracle builds out its cloud, it will likely be one of the world's larger clouds. ®