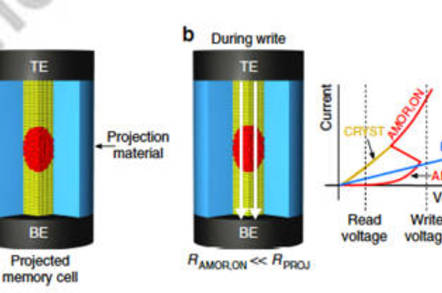 Phase change memory cells can, well, change, over time. Once set in their crystalline or amorphous phases the material can drift towards the other state rendering the cell's resistance level less clear and weakening its ability to story a binary one or zero.

PCM (Phase-Change Memory) is one of the candidate persistent storage technologies to take non-volatile memory speed and density forwards after NAND technlogy runs out of steam around the 15nm cell size level. Intel/Micron's crosspoint (XPoint) is another. Productising PCM technology has its problems, like all such technologies, and a cell's endurance and readability are two of them.

Applying electricity to the chalcogenide material in the cell changes its molecular state from diffuse and amorphous to crystalline. Each state has a separate resistance level and detecting each level is used as an analogue of a binary one or zero.

IBM researchers in Zurich devised a notion of encircling the cell with a pipe of a more stable material into which the resistance state of the PCM cell would be projected, where it would survive stably. Reading the cell would involve electricity traveling through pipe and not the cell itself, thus side-stepping the drift effects and avoiding noise involved with direct cell reading.

Wabe Koelmans, a Dutch scientist and IBM researcher had the idea originally and he and his colleagues have a paper being published in Nature about their experimental results. * They describe the concept of "a projected memory device, whose distinguishing feature is the physical mechanism of resistance storage is decoupled from the information-retrieval process."

the amorphous phase is denoted as AMOR with the corresponding resistance, RAMOR, and in the crystalline phase denoted as CRYST with resistance RCRYST. The projection segment is denoted as PROJ with resistance RPROJ. In write mode, the write voltage exceeds the threshold voltage, and the amorphous section goes into the ON-state with a resistance RAMOR,ON that is lower than RPROJ. This ensures that most of the current flows through the phase-change segment, resulting in Joule heating and subsequent phase transition. In read mode, because RPROJ is chosen to be much lower than RAMOR at low fields, the current preferentially flows through the section of the projection segment that is parallel to the amorphous section. Elsewhere, the current will preferentially flow through the crystalline section.

The researcher's experimental devices "consist of a 2.8-nm-thick TiN projection component and a phase-change component of either 15-nm-thick AgInSbTe (AIST) or 30-nm-thick GeTe."

The pipe of encircling material is used only in the read operation. The paper states; "The information that typically is stored into the length of the amorphous region is in a sense projected onto the projection component." How this projection happens is not explained.

The result of this design is that the read signal is much less influenced by noise and is more stable, being markedly less influenced by drift. It frees up the design of the phase change material and its properties, as the noise and drift effects are made less relevant. Hopefully PCM development will be accelerated by it. ®

Everspin's new gig: a gig or two of non-volatile RAM on PCIe

Smaller than Optane, but faster and perhaps a bit immortal too

Magneto-resistant upstart Everspin gets itself into an IPO whizz

Non-volatile RAMmer enters the most volatile situation of all