West's only rare earth mine closes. Yet Chinese monopoly fears are baseless 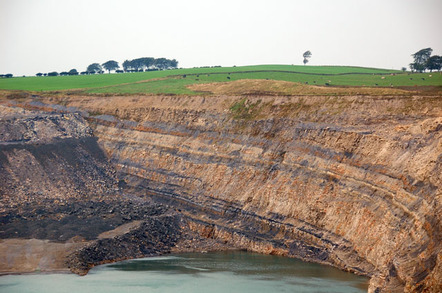 Worstall on Wednesday As El Reg's dodgy metals dealer it's incumbent upon me to tell you all that Molycorp has just closed Mountain Pass, the western hemisphere's only rare earth mine. This will, of course, mean disaster because we've suddenly no source of those lovely minerals with which to build all sorts of exciting gadgetry.

Prepare for a shortage of the neodymium for headphones, the terbium for CFLs, the lanthanum for Tesla batteries and so on.

Or, as I've pointed out quite a bit around here over the years nothing of the kind will happen. Other than to the wallets of those poor souls who invested in this company there's going to be an effect on the rest of us of pretty much zero.

MOUNTAIN PASS >> The only rare earth mining and processing plant in the Western Hemisphere is closing and virtually all of its nearly 500 person workforce is expected to be let go. Officials from Greenwood Village, Colorado-basedMolycorp, said earlier this week they will transition their massive San Bernardino County facility to a “care and maintenance” mode while it plans to continue serving its rare earth oxide customers via its production facilities in Estonia and China.

It is true that this means that there will be no mining of these elements anywhere in the Americas. That Estonian facility is tiny, meaning that the world is back to relying upon the Chinese and the other new mine run by Lynas Corp in Oz. As I say, that doesn't actually matter at all.

Half a decade ago China produced some 97 per cent of the world's supply of rare earths. They thought it would be a cute idea to try and flex the monopolistic power they had. Not so much to try and get more for the raw materials: no, they wanted people to move rare earth-consuming businesses into China. There were export restrictions and high export tariffs on the raw materials but none at all on things that were made using them inside China and then exported.

So, for example, there's a subsidiary of Siemens out there that makes the lutetium crystals which power MRI machines. If you can't get that Lu (and that one factory consumes perhaps 90 per cent of global production) then you'd better move the factory to where you can, eh? Into China, that is. Certainly one company making the mercury vapour charges for light bulbs (which are doped with rare earths (REs) to change the spectrum of light from them), the world's largest producer of them by far, seriously considered restarting the factory inside China.

What happened then is the fun bit. The rise in the RE prices this caused meant that Molycorp and Lynas were able to gain financing to respectively reopen, and open for the first time, their mines. Not only that but they could do something vastly more expensive: set up the processing plants needed to do the complex separation of each RE from the others. Which is, as I've mentioned before, our interesting little economic point.

Having a monopoly isn't all that useful a thing if, when you try to exercise your monopoly power, other people can come in and contest your monopoly. There's no shortage of rare earth deposits around the world so China's not got an exploitable monopoly.

Things get more fun, too: China is now losing money as a result of trying to exploit that monopoly. Here's a good guide to rare earth prices currently. The two to really look at are lanthanum and cerium oxide. They're always going to be at least 80 per cent, if not 90 per cent, of any specific deposit. Before China started to try to throw its weight around, they were up at $12 a kg; now they're around $4. And we've an interesting technical problem with REs. The rare stuff, the Tb, Dy and so on, is valuable. But to get to that you've got to extract all of the precursors. So, to get your Tb and Dy you've got to pull out your La and Ce before you can access them.

At $4 a kg you're going to be losing vast gobs of money on trying to market those relatively common REs that you must extract before you can get to the more valuable ones. Whether you are profitable overall will depend upon how much more you can make on the expensive ones than you lose on the common ones. Which, obviously, depends upon the concentrations in your original ore.

Amazingly, both Molycorp and Lynas have deposits that are very high in those cheapo REs and very light in the “heavies”, those rarer and more valuable ones. In any competition then, at any price level for REs in general, they are going to lose in the profitability stakes against Chinese producers who have better mixes in their ores.

Or, in a nutshell: rare earths aren't rare (nor earths); trying to exploit a contestable monopoly leads to competition arising; and, as in this case, the original producers are worse off than they were before they tried to exploit their market power.

Monopolies just don't matter as much as many people seem to think they do. ®