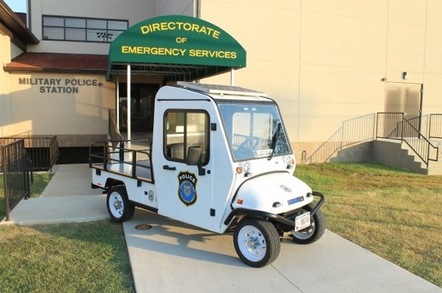 Many jaded readers of the Register, noting on the interwebs the endless stream of stories about self-driving cars - being worked upon by such companies as Google - may have wondered whether in fact anyone at all is actually working on the real, genuine problems confronting the human race.

Well wonder no more, my jaundiced friend, because news has reached us at last of boffins hard at work on something rather more immediately useful to humanity's suffering billions. Yes - as you've probably guessed by now, even if you missed the headline above - top scientists are working hard to bring us, instead of self-driving cars, self driving golf carts.

We learn this from an announcement by those splendid brainboxes at MIT, in which we are told:

An experiment [was] conducted over six days at a large public garden in Singapore, in which self-driving golf carts ferried 500 tourists around winding paths trafficked by pedestrians, bicyclists, and the occasional monitor lizard.

Many motorists of today would quibble perhaps over the absolute need to avoid colliding with the odd bicyclist or pedestrian on the way from A to B, but most would doubtless be unwilling to participate in a post-incident roadside discussion with a testy, man-eating monitor lizard such as a Komodo dragon or similar.

Not only do robot golf carts avoid possibly fatal lizard collisions, they offer a chance to use computerised booking systems to improve the efficiency of motorised transport.

"We would like to use robot vehicles to make transportation available to everyone," says Daniela Rus, a top MIT boffin involved in the lizard-proof AI golf buggy trial. "The idea is, if you need a ride, you make a booking, maybe using your smartphone or maybe on the Internet, and the ride just comes."

That's all very well, but what about the lizards?

In the experiments, the golf carts received no special treatment; they jockeyed for position on the garden's paths along with everyone else. But according to Rus, the obstacle-collision system encountered only one difficulty, when a large, slow-moving monitor lizard crossed the path of one of the golf carts.

"It was this stop-and-go game over who's going to do what," Rus says.

Sadly it seems that the potential robot-v-godzilla deathmatch was resolved fairly peacefully on this occasion, but it's clear that this technology has far more potential for the betterment of humanity's lot than comparatively humdrum, non-lizard-related robo cars.