Nexenta, SanDisk hop into bed, one thing leads to another – now they've got a 512TB flash brat

It's game over, spinning disks 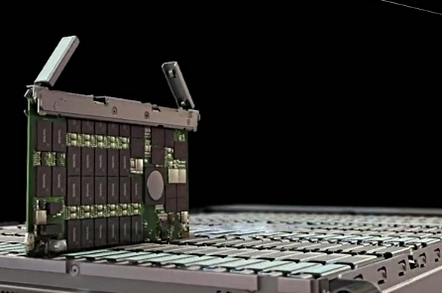 Slot those flash card babies in

Nexenta and SanDisk are integrating the latter's dense InfiniFlash JBOF with the former's NexentaStor to build a half-petabyte-in-3U all-flash array starting at $1.5/GB raw. At these prices disk may not be dead, but it's heading for the mortician's parlor.

Tegile has an IntelliFlash product using the same hardware, and says it costs about $0.50 effective GB. Tegile assumes a 3:1 data reduction rate, which gets us to $1.5/GB raw, simplistically speaking.

These prices kill 15K RPM 3.5-inch disks, and give 10K ones a severe headache – and it's only going to get worse. The 512TB InfiniFlash box will be a 1PB one in twelve months. We're looking at all-flash array (AFA) hardware becoming a commodity, with the deciding value being software-based.

Nexenta and SanDisk channel partners are being told they can now sell a 64TB - 2PB system that is a "pre-tested, full-featured, cost-effective, high-performance system [for] virtualization, Big Data analytics, data warehousing, and dynamic modeling." Extra dense active archive repositories are another use case.

The Nexenta/SanDisk HW/SW combo has been tested for use with Dell PowerEdge R730 and Supermicro's SuperServer SYS-6028U-TR4+.

It will be available through selected channel partners and you can check out the Nexenta background doc here [PDF]. ®