Now will you please stop spaffing our slides everywhere? 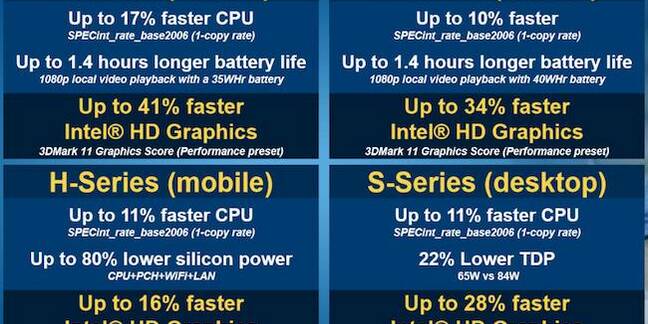 A leak in Japan has led Intel to rush out the full details of its sixth-generation Skylake chip lineup.

Today's launch follows the previous announcement of Core i5 and i7 variants, and the leak of much of the lineup in July.

Whether it's unfounded optimism, or merely an edict that a processor family has to run from bottom-to-top, Chipzilla seems to maintain the hope that segments like the collapsing tablet market are still worth producing chips for.

Intel's LINK fact sheet says it's been working with Microsoft to Cortana-ify the chips, with better microphone handling, speech algorithm tuning, and better voice activation. Windows Hello and RealSense Camera support bring facial recognition to the delighted masses (and stymie the tinfoil-hatters who put tape over their cameras).

Full SKU details are in the Intel fact sheet.

Intel rushed its official release ahead of its 9pm PDT embargo after the slide deck leaked over at wccftech. ®