Tree hugger? Your wooden harem is much bigger than thought

Quite literally trillions of trunks for cuddling 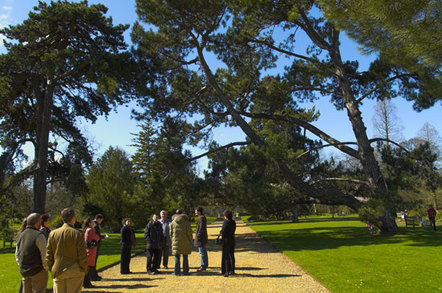 Tree-lovers rejoice! It turns out there are really hugely more trees on planet Earth than anyone had thought.

In fact, a new study just published says that there are no fewer than three trillion huggable woody trunks alive on the planet today – roughly seven and a half times as many as the previous best guess of just 400 billion. As a result, it's now clear that there are approximately 422 trees for every human being, rather than a comparatively paltry 61.

"Trees are among the most prominent and critical organisms on Earth, yet we are only recently beginning to comprehend their global extent and distribution," enthuses Thomas Crowther, postdoctoral forestry boffin and lead author of the study.

"They store huge amounts of carbon, are essential for the cycling of nutrients, for water and air quality, and for countless human services [for instance, hugging – Ed]" he adds. "Yet you ask people to estimate, within an order of magnitude, how many trees there are and they don't know where to begin. I don't know what I would have guessed, but I was certainly surprised to find that we were talking about trillions."

The study was better than previous ones, we are told, because it used "a combination of satellite imagery, forest inventories, and supercomputer technologies," and involved contributions from researchers in 15 different countries. Crowther and his colleagues around the world were inspired to carry out their new and improved tree census by a request from the United Nations Billion Tree Campaign, which has in fact planted well over 10 billion trees – and was presumably feeling quite pleased about that until Crowther et al revealed that this is not really all that many.

According to the new study, humans do away with a hefty 15 billion trees annually – some 0.005 of the total, which chimes closely with a previous satellite-data study of forest area from 2013. While this is a lot of trees, rates of forest loss have slowed in recent times and many scientists assess that this is actually being more than offset by the increase in forest density – the so-called "Great Reversal" for the world's forests after thousands of years of human-caused decline.

Crowther and his colleagues' study is published in Nature. ®