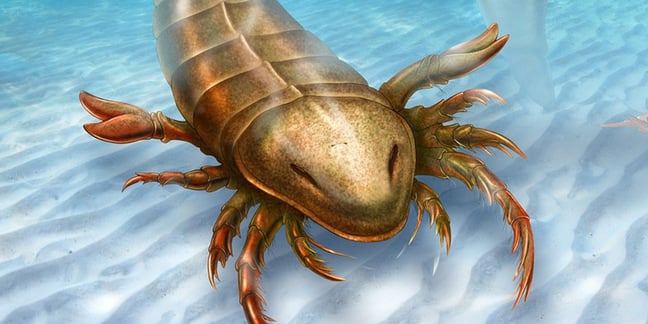 Scientists have unearthed the remains of a "bizarre" monster sea scorpion which 460 million years ago prowled the oceans covering what is now North America.

The remains of the 1.7m-long eurypterid Pentecopterus decorahensis were found in Iowa by a team led by Yale's Dr James Lamsdell.

They reveal multiple forelimbs probably used to grapple the beast's unfortunate prey, and a pair of paddle-shaped legs most likely used for propulsion.

Lamsdell described the fossilised remains as being in a "fantastic" state of preservation. He said: "The exoskeleton is compressed on the rock but can be peeled off and studied under a microscope. This shows an amazing amount of detail, such as the patterns of small hairs on the legs."

"The new species is incredibly bizarre," added Lamsdell. "The shape of the paddle (the leg for swimming) is unique, as is the shape of the head. It's also big, at over a metre and a half long."

Given its multiplicity of appendages and likely aggressive nature, Pentecopterus decorahensis is named after the "penteconter" – the 50-oared ancient Greek warship.

The extinct eurypterids are the ancestors of modern spiders. Pentecopterus decorahensis is the oldest yet discovered, predating the previous record holder by some 10 million years.

Lamsdell and his team's findings will be published in BMC Evolutionary Biology.®