What's the noise from SF? 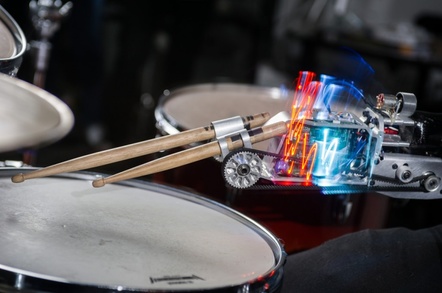 VMworld 2015 There's been a whirlwind of supplier announcements in the run-up to VMworld, which takes place between August 29 and September 3 in San Francisco.

We've covered the main storage ones already, but a backlog of others built up. So here, for your delectation, is what the sexy sextet of Arcserve, Catalogic, Druva, Hedvig, IBM, and Nutanix have been up to.

Backup supplier Arcserve is growing like a bandit since its spin-off to private equity from staid CA Technologies in 2014. Arcserve says it has nearly tripled its customer base, with 85 per cent representing net new customers, and hired 170 additional employees. There are more than 45,000 end users of its technology in 150 countries, and the UDP Appliance has had 700 per cent sales growth over the last fiscal year. No doubt from a small base number, but it's still good going.

It launched Arcserve Cloud, integrated with the UDP Appliance, to provide off-site disaster recovery and business continuity in July this year. Using this, MSPs and VARS can offer DR-as-a-Service.

Arcserve has a deal with Ingram Micro to market, sell, and support its product line to channel partners in the US and Canada. This partner program has supported over 7,200 channel partners and service providers this year.

CEO Mike Crest is pushing Arcserve hard. The company wants to extend the geographic coverage of the Arcserve Cloud and bring out larger capacity appliances. It says it "is aggressively looking at additional offerings for its solution portfolio." Private equity ownership suits it.

Catalogic will be launching v2.2 of its ECX copy data management product in September. It adds support for IBM's Storwize, SVC, and v9000 storage platforms, and also IBM Flash Copy Manager.  The company has added a customizable template feature and says the release "delivers major enhancements to the workflow automation and orchestration for copy data creation and use."

Druva, the end-point backup, file sync 'n share, data governance business, is licensing Axcient's application-aware granular recovery technology for Microsoft Outlook. With it, individual objects can be restored from Outlook. It will be used in "Druva's inSync endpoint and cloud data protection solution, assisting in improving the understanding of Microsoft Outlook .PST files during the legal review process."

Scott Siragusa, Druva's VP for Global Business Development and Channels, had a prepared quote for this: "Restoration of large .PST files has always been problematic. Axcient's Granular Recovery technology offers yet another way for customers to improve their understanding of Microsoft Outlook files during this process."

Hedvig is partnering with ClusterHQ to handle containers better. The Hedvig storage SW delivers a suite of data services, including deduplication, compression, and tunable replication, on a per-volume basis.

Hedvig states that, while developers can spin up containerized applications in a few seconds, provisioning storage for these environments can take hours, days, or even weeks.

Avinash Lakshman, Hedvig founder and CEO, had a prepped quote: "Our collaboration with ClusterHQ eliminates storage bottlenecks with Docker. Hedvig’s distributed storage architecture is designed for containerized applications and microservices environments, and with Flocker by ClusterHQ we are able to seamlessly orchestrate storage with Docker for real production environments.”

The driver is available on Github. Visit Hedvig and Flocker at VMworld, San Francisco, Aug 31–Sep 3.

IBM is extending the features in its Spectrum Storage range. It says it's won 1,000 new customers to this product range in the last six months. Big Blue is aiming to have Spectrum Protect – previously Tivoli Storage Manager – which supports the IBM Cloud today, support other public clouds in future. Spectrum Protect will be offered as an option on VersaStack systems, jointly developed by IBM and Cisco, in the fourth quarter of this year.

The mighty blue one wants to remind us that "a single IBM Spectrum Protect server performs the work of up to 15 CommVault servers*", so you can consolidate more with IBM.

Making an oblique dig at Veeam, William Bush, technical services manager of CSP Tectrade, says: "You don't have to run a separate virtualization-only technology to supplement IBM Spectrum Protect, so you get a single comprehensive management and storage experience."

Spectrum Accelerate on Cloud provides Spectrum Accelerate – XIV storage software – as a service to IBM Cloud customers via IBM's SoftLayer infrastructure. This "helps companies to deploy block storage on SoftLayer without having to buy new storage hardware or manage a large appliance farm."

A SW-only version of Spectrum Accelerate "is now available with portable licensing across XIV systems, on-premises servers, and cloud environments."

Nutanix has a new pricing scheme called FlexPrice and says service providers can "procure Nutanix-qualified hardware and enable Nutanix web-scale software on a flexible subscription basis. Nutanix customers can deploy and expand their infrastructure one node at a time with 3, 6, 12, and 36 month term-based pricing, and lower upfront capital costs for storage, servers, and virtualization."

* Based on CommVault sizing and configuration guidelines, compared to IBM.