Come on, give it up and let Speckled Jim rest in peace 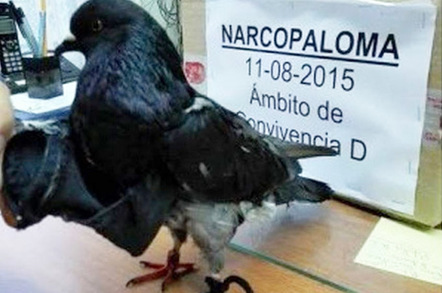 A 22-year old Spaniard claims that he's cracked a previously unsolved WWII coded message. Others have claimed this before and there's nothing particularly solid to back up the latest effort, but let's have a look at it anyway.

Dídac Sánchez claims that he had cracked the encryption scheme used in the last undeciphered message and challenged anyone to figure out the code's structure in return for a €25,000 reward.

In response to queries from El Reg, the UK's intelligence and security organisation, GCHQ, expressed grave doubts about the claim:

We stand by our press notice of 22 November 2012 in that, without access to the relevant codebooks and details of any additional encryption used, the message will remain impossible to decrypt.

Similarly it is also impossible to verify any proposed solutions, but those put forward without reference to the original cryptographic material are unlikely to be correct.

The code was on the leg of a homing pigeon that evidently came to grief close to home on returning from a mission during the Second World War.

David Martin from Bletchingley, Surrey found the skeleton of homing pigeon 40TW194 in his chimney while refurbishing his home in 2012.

The bird's skeleton had a red capsule attached to its leg. The tube contained an encoded message written on thin cigarette paper. It has 27 codes, each comprised of five letters or numbers, and the signature of a presumed Sergeant W. Stot.

It was addressed to X02 (presumably Bomber Command), and it is believed to date from the time of the Normandy D-Day landings (6 June 1944).

Gord Young, from Peterborough, in Ontario, Canada, an amateur code-breaking enthusiast and history buff claimed to have cracked the code in December 2012. The claim remains neither verified nor debunked.

Around 250,000 pigeons were used as carriers of secret communications during World War II.

For Your Eyes Only

Sánchez claims cracking the code inspired him to develop new security software called 4YEO (ForYourEyesOnly), based on the structure of the previously undeciphered encrypted code used by the British and the French Resistance.

This encryption software will be marketed from late 2016 as a data encryption technology.

To demonstrate the security of the 4YEO system, Sánchez has published a message with an identical structure on his website, where he is offering EUR25,000 to anyone who can successfully decipher it.

The code cracking competition runs from 1 September to 31 December 2015.

"To date, the intelligence services have been unable to crack this message's code because they were missing the code word, the code book and the encryption method used. After successfully deciphering the method used I have developed a piece of software that I believe is one of the most secure in the world, because I have adapted the British code to the data security required today by new technologies," Sánchez claimed.

PR representatives of Sánchez are yet to respond to requests for insights into how the Spaniard succeeded where others have drawn a blank.

Whether or not 4YEO will be submitted to peer review at any point also remains unclear, at least pending a reply. ®