Wow, Barcelona really has a problem with tech disruptors. Watch out Airbnb

Another pillar of the 'sharing economy' in the city's crosshairs 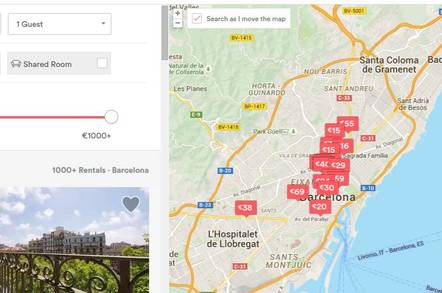 Fresh from sending the Uber question* to the European Court of Justice, it appears the city of Barcelona is now spoiling for a fight with another tech disruptor – this time lodgings lister Airbnb.

Earlier this week, Airbnb announced it would be collecting tourist tax on behalf of its users in Paris from 1 October, and it appears Barcelona’s new mayor, Ada Colau, wants a piece of that action.

Colau said she will fine the company if they marketed apartments to tourists that were not on the Catalan tourism register and hence not paying the Catalan tourist tax of €0.65 per person, per night (in Paris it’s €0.83).

But getting on the register is easier said than done, as there is currently a freeze on new registrations. The mayor, who took office in May, is worried that “uncontrolled tourism” will spoil the city and make rents unaffordable for locals.

“An internet platform cannot become a means to thwart the regulations and to shelter illegal tourist apartments. In that case we do have to intervene very forcefully,” Colau told Reuters.

Last year, the Catalan regional government proved this by fining Airbnb €30,000 and threatening to block access to its website.

Airbnb – one of the big disrupters in the "sharing economy" and valued at more than $20bn – has around 18,600 listings in Barcelona.

Airbnb said that it would not hand over users’ information to the Catalan authorities and instead is likely to seek an arrangement like that in Paris.

The company has listings in more than 34,000 cities worldwide and Barcelona is its third most-popular European destination. ®

*A Barcelona judge has decided to let Europe’s highest court decide, crucially, whether or not Uber is a tech or transport outfit.