Anyone fancy being 'last man standing in the PC industry'? Anyone? 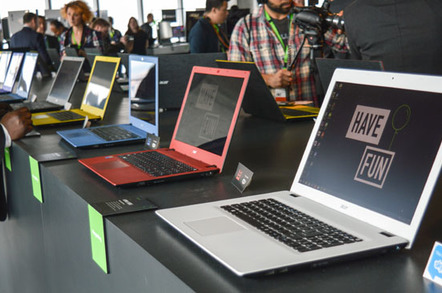 Stan Shih, the man who founded Acer and returned to rescue the business when it fell on hard times, would be receptive to a takeover bid but – despite its continued troubles – warned it won’t be sold on the cheap.

The Taiwanese PC-maker’s honorary chairman told local press that he would “welcome” such a move, as Reuters reported, following a slide in the share price. Acer's market cap has tumbled by 50 per cent since April.

Company stock value was dented, like others, in the market crash on Monday, and has slumped to a level that makes it look vulnerable.

Shih said somewhat cryptically that any buyer would get a “shell” of a business and even then may have to pay through the nose for it - this indicates management would leave in event of a takeover.

Acer made a name for itself as a low-cost PC brand, rising to the top of the European market on the back of cheap consumer lappies. But the sales decline began in the second half of 2010, months after the iPad launched.

Since then, various management teams have fought fires but sales have continued to drop; in some quarters by double digits. Profits have been hard to come by, too – Acer reported losses for 2011, 2012 and 2013.

Shih and co-founder George Huang came back to douse the flames in late 2013 and in the following calendar year the company returned to profit, albeit just £58.5m on a turnover of several billions. The latest CEO Jason Chen has talked up the company’s long-term prospects, but analysts don’t share the same prognosis.

The PC industry is more about scale than ever before: it is a mature sector that has already seen the withdrawal of Samsung and Sony, while Toshiba has scaled back its business.

The major players, such as HP, Lenovo and Dell, would gain nothing on the technology front from buying Acer – which derived 65 per cent of its revenues from PCs last year – save for perhaps some low-margin market share.

Surely it would be cheaper to let the company continue to wither on the vine?

More than a decade ago, Acer said it was the PC maker of the future, based partly on the relatively tiny workforce – it employs 7,000 heads, which is fewer than some vendors employ in their country operations.

As we pointed out recently, Acer is running out of runway and something has to give. We doubt any of the majors in the industry will want to buy the business, and the politics involved in merging with Taiwanese rivals HTC or Asus make such a move unlikely, though not entirely implausible.

A private equity firm may see some value in the organisation, as happened with Sony's PC business, perhaps seeing an opportunity to scale back for the time being and get the house in order.

We asked Acer’s PR to verify the comments from Shih – as the Reuters report has done already – but the person in charge isn’t back until after lunch.

Acer's PR man contacted us to clarify Shih's statement on US and European companies.

"Stan Shih was referring to the difference among cultures. The US and Europe are well-established in terms of global companies and brands; therefore, generally speaking the management teams need only work for money."

He said in Taiwanese businesses are "still building and promoting brands internationally. Many Taiwanese have a sense of mission and responsibility in addition to emotional factors tied to the companies they work for...for many Taiwanese management teams, money is not the only factor for staying with a company." ®