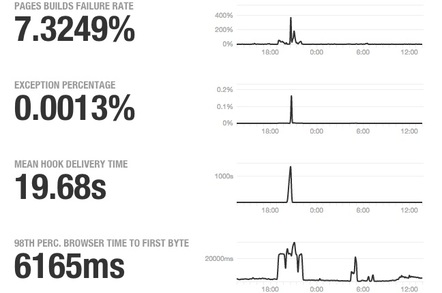 GitHub is under a distributed-denial-of-service attack being perpetrated by unknown actors.

The service's status page reported “a brief capacity overload” early on Tuesday. The site's assessment of the incident was later upgraded to a a DDOS and at the time of writing the site is at code yellow.

The graphic at the stop of this story (here for mobile device readers) shows that something gave the site a big kick in the web server and that service has wobbled since.

At the time of writing, the site says all services are functioning just fine.

This is the second significant DDOS GitHub has endured in 2015 after a March incident saw the site attacked by entities apparently lurking behind China's Great Firewall. On that occasion the attackers hammered the site for four days. In 2013, the site copped twin attacks within weeks of each other.

At the time of writing, nobody's been fingered for these new attacks and the site appears to be functioning just about normally. ®