Flight of the RFID tag 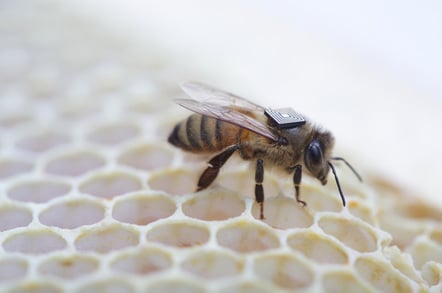 Scientists want to electronically tag the world’s honeybees in a bid to understand the mass death of entire populations.

The Commonwealth Scientific and Industrial Research Organisation (CSIRO) in Australia has called for a global project fitting bees with micro-sized RFID chips to gather critical data.

Data would be harvested to generate 3D models of the bees’ activities whilst on the move.

The goal is to follow the bees’ behavior and identify their response to factors that might generate stress, thereby affecting their health and attempts to pollinate plants.

CSIRO made the call Tuesday having already successfully tagged more than 10,000 bees in Hobart, Tasmania.

Australia’s national science body says it now wants to turn this into a global effort it's leading, called the Global Initiative for Honey Bee Health.

Data generated by the study would be used by scientists, beekeepers, primary producers, industry groups and governments.

“The tiny technology allows researchers to analyse the effects of stress factors including disease, pesticides, air pollution, water contamination, diet and extreme weather on the movements of bees and their ability to pollinate,” de Souza said in a statement.

Boffins want to harvest critical environmental data in and around the bees’ home hives, such as humidity, temperature and solar radiation, too.

Data from the bee-mounted RFID tags was harvested using Intel’s Edison Breakout Board kit on a postage-stamp-sized reader mounted inside hives.

Also, the Arduino open-source Breakout board, with micro USB, SD card connector and digital and analogue in puts and outputs.

The Intel reader was transmitted to CSIRO’s Data Access Portal, where it was dissected using methodologies developed during the Tasmania push.

CISRO reckoned it picked Intel’s Edison Board kit for its reliability, small size, flexibility in programming and customisation, and low power consumption.

The cause of the fall is unclear but theories range from climate change to use of chemical pesticides in agriculture. ®