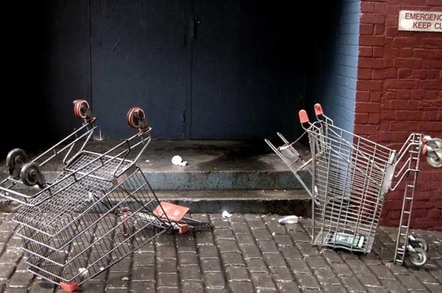 Something for the Weekend, Sir? "Please wait while we verify your bags." Oo-er, sounds a bit rude!

In a Carry On film, they’d follow this up with "Ooh nurse, feel my pulse". Or as Butthead might say: "Uh-huh-huh. You said 'verify'. Uh-huh-huh..."

After last week's SftWS column was spiked, The Reg was kind enough to re-run one of my old musings about sexual double-entendres. And by coincidence, here I am in Tesco with a robotic woman’s voice giving me the old nudge-nudge wink-wink. "Verify your bags," indeed.

I'm reminded of a friend who, upon entering a massage parlour and being shown where he could undress, was asked if he needed "a pouch". Assuming this was to safeguard his modesty, he nodded his assent. They handed him a pencil case: it was for his wallet and keys.

Then there was that time when I was studying French at Perpignan University and managed to make the classic slip (uh-huh-huh) of referring to La Bourse – the Paris Stock Exchange – as Les Bourses, which literally means "purses" but commonly means "bollocks".

Just picture the scene as my tutor put her feet up next to the fire to read my essay one evening with a glass of chilled muscat, marvelling at my insistence that French president François Mitterrand personally investigate the pernicious influence of my gonads on the country's economy. I can only imagine her wonderment, too, that I should have capitalised them as Les Bourses. If it was a Marks and Spencer advert, I'd be saying my testicles weren't just any testicles. Mine were The Testicles.

I’ve been saving up samples of office innuendo for the day when I am successful, rich, old and ugly enough to deliver them in public so that I come across as old-fashioned, charming and harmless. If you try sexual innuendo in the office while you’re still young, you come across as creepy, sad or desperate. If you try it in middle age, you get pepper-sprayed. Old is where the real action is at.

"Miss Jones," I will call to my young secretary. "I need you to take something down."

"Here, let me help you Undo that."

You get the idea.

Let's get back to my purses, I mean sacks. Sorry, bags. Whatever. A robotic recorded voice has just said: "Please wait while we verify your bags." Which is quite literally doubly amusing, because although I quite clearly have just the one bourse, the auto checkout robot thinks I have put two of my bourses in the bagging area. Oo-er, sounds a bit rude!

Regular readers will remember that I have form with self-checkouts, as featured in another recent blast from the past. Bloody repeats.

Hmm, should I do as I'm told and wait here feeling dopey (Cf. Snow White jokes) next to a flashing red beacon that seems to scream GUILTY! GUILTY! until a tired and frustrated supermarket employee notices my plight?

Next page: Let me check your bulging sack
Page:
Tips and corrections
72 Comments