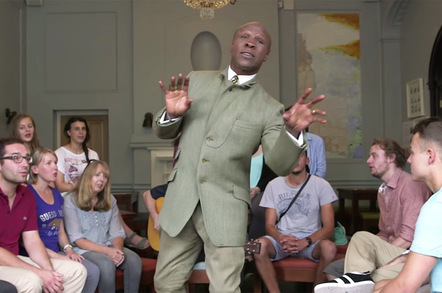 It's taken almost 20 years, but Alan Partridge fans may finally get to see what is considered one of the great unmade TV series: Youth Hostelling with Chris Eubank.

A 1997 episode of I'm Alan Partridge saw the eponymous hero pitch an increasingly bizarre list of programme ideas to a BBC executive, as he suffered a nervous breakdown.

Youth Hostelling with Chris Eubank was one firmly rejected idea, but little could Partridge have imagined that his vision would one day become reality.

Nicely done. It's apparently taken Eubank a while to get with the programme, as it were. He said: "Up until recently, I had absolutely no idea why people used to mention hostels to me and smile. It was truly an unsolved mystery to me."

At least one other of his ideas from that increasingly addled and desperate meeting, Cooking in Prison, was purloined by none other than Gordon Ramsay for his show Gordon Behind Bars, in which the foul-mouthed chef goes into Brixton prison to teach the prisoners how to make cakes.

It remains to be seen if Partridge's other concepts – including Arm Wrestling with Chas and Dave, Inner City Sumo and the absurd but potentially promising Monkey Tennis – ever see the light of day. ®