'Pebble-accretion' theory points to rapid formation of Saturn and Jupiter 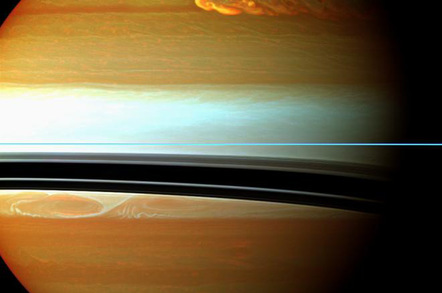 New research has lent weight to the idea that the cores of gas giants, such as Saturn and Jupiter, were quickly formed from billions of small pebbles, rather than a smaller number of more substantial rocks over an extended period of time.

According to Nature, previous wisdom had it that these planets built up from "a stately agglomeration of much-bigger chunks, each about a kilometre across" – dubbed "planetesimals"* – which slowly "combined with each other until they were big enough to hold on to a gaseous cloak and become a true gas giant".

The problem with this scenario is that it's unlikely the process could have finished before the disk of dust around the Sun dissipated in the early solar system.

Enter the "pebble-accretion" theory, first offered up in 2012 by Michiel Lambrechts and Anders Johansen of Sweden's Lund University. "It was able to explain how a planetary core could form rapidly, as friction with gas in the disk would have slowed pebbles enough for them to be accreted on to an embryonic planet," Nature notes.

Nonetheless, the first simulations testing the idea served up "hundreds of Earth-sized objects" orbiting the Sun, as opposed to a few cores around "ten times the size of the Earth", which scientists reckon were the basis for the gas giants.

Now, a team led by Harold Levison, a planetary scientist at the Southwest Research Institute in Pebble Boulder, Colorado, reckons it has a scenario which confirms the pebble-accretion theory.

The solution was to allow "more time for the pebbles to develop into planetary cores". As these simulated protoplanets grew, they tended to "bully" their smaller neighbours out of the dust disk, resulting in more food for them, and ultimately a handful of big bodies.

Indeed, "depending on starting conditions", Levison and his colleagues were able to produce "between one and four gas-giant planets, similar to Jupiter, Saturn, Uranus and Neptune", in line with the Nice model for solar system development.

Levinson said of the team's findings, which appear in the 20 August issue of Nature: "It really is a paradigm shift for how planets form." ®

* Planetesimals themselves formed from ice and dust, back when it was all swirling disks round here.