Don't worry, it can't outrun you… yet 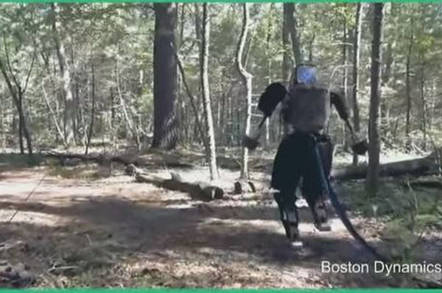 Boston Dynamics, the Google-owned mobile robot developer, has posted a new demonstration of its Atlas robot walking around the forest.

In the video, Boston Dynamics founder Marc Raibert shows how the Atlas anthropomorphic robot is being developed to maneuver itself over more difficult outdoor terrain.

The video demonstrates an Atlas robot walking slowly up a hill, reacting to the wooded terrain and walking over and around obstacles. The robot shown in the video has an attached cord running into a human-carried power unit, though Raibert notes that the company is developing a cordless unit.

"We are interested in getting this robot out into the world," said Raibert.

"Out in the world is a totally different challenge than in the lab; you can't predict what it is going to be like."

The video of the lumbering bi-ped immediately drew comparisons to the infamous Patterson Gimlin "Bigfoot" film.

The demonstration is the latest from Boston Dynamics as the company continues to develop agile robots capable of mimicking the motions of humans and animals. Previous models have included a "cheetah" robot capable of running 28.3 MPH and a surprisingly resilient four-legged robot named Spot.

Though Atlas hasn't been known as the most graceful bot in the Boston Dynamics lineup, the latest video shows him making strides, both figuratively and literally. "I'm not saying it can do everything you can do," said Raibert, "but you can imagine, if we keep pushing, we'll get there." ®