IT jargon is absolutely REAMED with sexual double-entendres 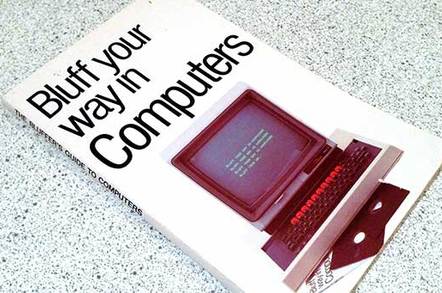 Something for the Weekend, Sir? Alistair Dabbs is currently hanging upside down in a cave at an undisclosed location. While he slakes his thirst with the blood of those who crossed him, El Reg is re-running one of his timeless classic columns.

Yes, she has had a good day, she says. No, there was nothing in the post. Yes, the cat returned home safely this morning. And no, her computer is NOT showing the Debenhams winter catalogue.

That is, as long as you ignore that time I slipped in the shower and fell on the bathtaps.

This is not the first time my wife – a linguist – has inadvertently taught herself the language of the gutter. Intrigued by the possible etymology of the American expression humdinger, she read in a dictionary of slang that it was a contraction of humming and dinger. This led to the discovery that humming too has an unrelated sexual connotation. Let’s not get into details: suffice to say it combines considerable oral capacity while demonstrating the ability to hold a tune.

Despite being greatly amused by the catchy names, euphemisms and metaphors assigned to the dark underworld of human indulgences, I remain blandly ignorant of them. A drunk sales colleague in the 1990s once regaled the editorial team down the pub with stories of the many places where he had “taken Charlie” after which I, with charming naivety, asked him if Charlie still worked there. I have a blind spot when it comes to this stuff. Blind spot is another metaphor, by the way: there is nothing functionally awry with my retinas.

I say this in defence of a recent cock-up (again, not literally) committed during a client visit. Being led in to a board room populated by women, I caught the end of their private conversation – lots of sniggering and the words “mons pubis” pronounced in an elaborate manner. I was convinced I had once taken a snowboarding holiday on an Alpine mountain by that name, so you can imagine the reaction as I walk in, put on my biggest smile and blurt out: “I’ve been down there!”

Silence descends upon the boardroom. Every face turns towards me with a stony expression.

“It wasn’t great...” I mumble, a little unsure in my faltering attempt to make conversation. “It was very wet.”

Someone gasps. A tumbleweed rolls by. A pin crashes deafeningly to the carpet.

“Sorry, we must be at cross-purposes,” I offer, looking for a way out. “I thought you were talking about skiing.”

Puzzled expressions all around.

“What were you talking about?”

Nothing relevant, they tell me, least of all to skiing; can we now please begin the agenda; no, this seat is taken; so is that one; yes, that one too; feel free to sit at the far end of the table; yes, right over there; yes, away from the door; away from us; keep your hands where we can see them, thank you.

Anyway, back to catchy names, metaphors and euphemisms. Computing is full of them. After all, an icon isn’t a focus for reverence and a folder doesn’t fold. The reason for this, as desktop computing historians will tell you, is that ordinary humans understand software better that way. Whatever you think of Apple and the Xerox PARC Group, few people want to hear IT being described in IT terms.

I was reminded of this during a recent clean-out of the attic which led to the rediscovery of a booklet purchased in 1988 entitled Bluff Your Way in Computers, by Alexander C Rae and Robert Ainsley. 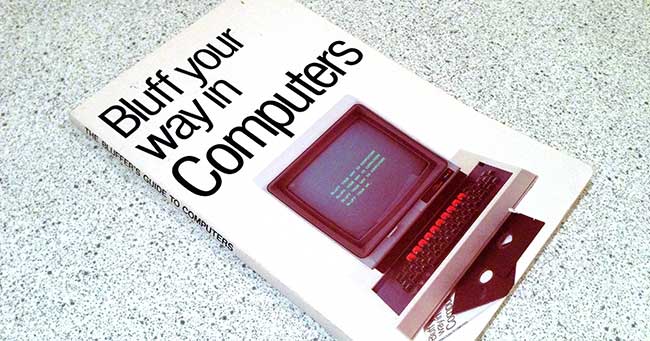 A 1988 reference manual for budding BOFHs.

There’s a nice bit in it about the incomprehensible nature of error messages and how this might be used to a bluffer’s – or indeed BOFH’s – advantage. One such apparently genuine software error message of the day quoted by the authors was: VME ERROR 37022: Hierarchic name syntax invalid taking into account starting points defined by initial context. Lovely. I’ll have two of those with curly fries and a Coke, please.

Jump forward just 12 years and we get a rather different kind of bluffer’s guide, this time aimed at primary school children, so commonplace have PCs become by then. With circular pages bound together between furry material and closed with a zip to make it look like a toy mouse – mouse, geddit? – Chip’s Computer Fun by Dee Wood tries to teach kids about computers using simple English.

The hideous lovechild of Dangermouse and Zippy off Rainbow

The results are varied. Impressively, it manages to encapsulate the concepts of word processing, databases and spreadsheets in two short sentences. Less useful are throwaway jargon-busters such as describing Buses as “electronic pathways linking chips”, unhelpfully accompanied by cartoony illustrations of – you guessed it – a red London bus and some potato chips. More fun are its memorable and highly evocative statements such as “We think computers are clever but they can only count up to one!” and “The very first modern computer, called Colossus, was so big it filled a room!”

Funny that – at home, I have a room that’s so big, it fills a room. When I was a student, I lived in a veritable cupboard but when I told people “my bed fills the room”, some of them took this to mean I slept on a bouncy castle.

Long before these stilted attempts to talk tech to users, funky programmers – sorry, we call them “coders” these days – would frequently employ gently comedic alternatives to truthful reporting in their user alert messages during product development. Back in 1987, an ex-schoolfriend who went into system analysis told me how she’d been called up by one of her vast corporate clients – yeah, a real fat bloke, he was – to report that his system had gone down and left him with this emotive but useless message: Woah, dude, heavy shit!

Even as recently as last month, a project I am working on now was ruffled for a day when it was discovered that a progress bar was being accompanied by a randomised message that variously reported Just walking the dog... or Reaping the corn... or Churning the milk... during file transfers. The thing is, even the project leaders were pleasantly surprised by the light-hearted euphemisms inserted by the developer but felt that a more accurately descriptive and businesslike Transferring files to your private folder... would be preferable. But boring boring boring.

Indeed, almost as boring as the Steve Ballmer-authored BSOD. Surely he could have come up with something with more of that unique Ballmer personality such as: Woo! Yeah! All right! I love this crash!

Hang on, I might have misjudged the powers that be. Perhaps the real reason for ensuring that alert messages are dull is that walking the dog, reaping the corn and churning the milk are actually yet more euphemisms for disgusting sexual practices of which I am blissfully unaware. Come to think of it, even transferring files to your private folder sounds a bit naughty in a nerdy kind of way.

Therefore, I have set myself a new goal for the week: to invent a fresh set of sexual euphemisms that on face value (no missus) seem smooth enough to insert (ooh yes) into alert messages. It’ll give me a laugh, anyway, to rewrite a user interface with the help of excerpts from a Frankie Howerd stand-up.

So far, I have established a few easy ones, such as Unzipping full log and Your assets are too large to bundle but I’m sure I can do better. I am always wide open (eheh) to suggestions (fnar fnar). Perhaps readers who grab my column (yuk yuk) every week would like to put their oar in (easy this, innit?)

Alistair Dabbs is a freelance technology tart, juggling IT journalism, editorial training and digital publishing. He realises that his fictitious personality of social media ‘Hank Waggenburger III’ might turn out to be another euphemism, as in “Good evening, sir. Would you like me to hank your waggenburger?” Who knows what they’ll make of Norbert Spankmonkey...